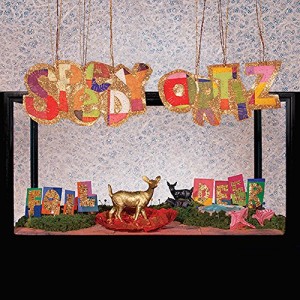 Fire Note Says: Sometimes a band actually lives up to the hype.
Album Review: Massachusetts quartet Speedy Ortiz began life as a solo project for poetry professor Sadie Dupuis and her decidedly nineties take on indie rock. Her lyrics came at you fast and furiously and she released The Death Of Speedy Ortiz LP to an unattentive world. Becoming a full band, Speedy Ortiz went on to release an EP and then, BAM!!!, along came 2013’s surprise hit Major Arcana. That album made a lot of people take notice and landed on quite a few year-end lists (mine included as I had it at #8 for the year.) Plenty has happened since then – not least of which was the defection of guitarist Matt Robidoux who left after last year’s Real Hair EP. Given how important he was to their sound it could have been a fatal loss. His classical training and music theory background allowed all the noisy dissonance to make sense. The interplay between his and Dupuis’ guitars was as essential to what the band were doing than all the high-brow poetical leanings found on their lyric sheets. But Speedy Ortiz found an extremely able replacement: Devin McKnight from the wonderful band Grass Is Green and he does just fine. Make no mistake – the loss is felt but McKnight mitigates it to the point of almost not noticing. Almost.
Foil Deer is not as good as Major Arcana. Let’s just get that out of the way up front. It’s a solid record nonetheless. After a pounding 90 second introductory tune, “Raising The Skate” sounds like the bastard son of Built To Spill and Pavement – that is until Dupuis starts singing. Her observational style is now much more confrontational: “I’m not bossy/I’m the boss/Shooter not the shot.” There are guitar pyrotechnics everywhere but it’s the rhythm section of Mike Falcone (drums) and Darl Ferm (bass) who keep things grounded. They are locked in throughout and give the guitars license to weave their way in and around the melodies. The first single, “The Graduates”, is a fine example of the Speedy Ortiz way of doing business. “I was the best at being second place/Now I’m just runner up” is a line that pretty much sums up the slacker/loser ethos Dupuis is expounding upon here in the 21st century. There aren’t too many acts out there right now playing indie that actually rocks so the channelling of yesteryear’s touchstones is to be expected (Dupuis was in a Pavement tribute band called Babement, after all.)

Besides the line-up change the one thing that Foil Deer is missing is the flagship song, the one the whole album revolves around. Major Arcana certainly had it with the brilliant “No Below.” This time we merely have a bunch of really good songs. From the twisted dance beat of “Puffer” to the off-kilter nursery rhyme delivery of “Ginger” there is a lot of territory covered within the album’s twelve tracks. Nothing feels like filler as everything has been thought out as the songs retain an inner logic even as they go off in different and unexpected directions. This is a band that doesn’t do off-the-cuff. If there’s a criticism of Speedy Ortiz to be made it may be the scholarly seriousness with which they approach their craft.
That’s the thing about Speedy Ortiz: in spite of the emphasis on wordplay they still make a compelling racket. It’s fun and it’s profound all at the same time. You don’t really need to delve into the lyrics to enjoy what they’re doing. But it doesn’t hurt.
Key Tracks: “The Graduates” / “Raising The Skate” / “Ginger”
Artists With Similar Fire: Pavement / Pile / Pixies