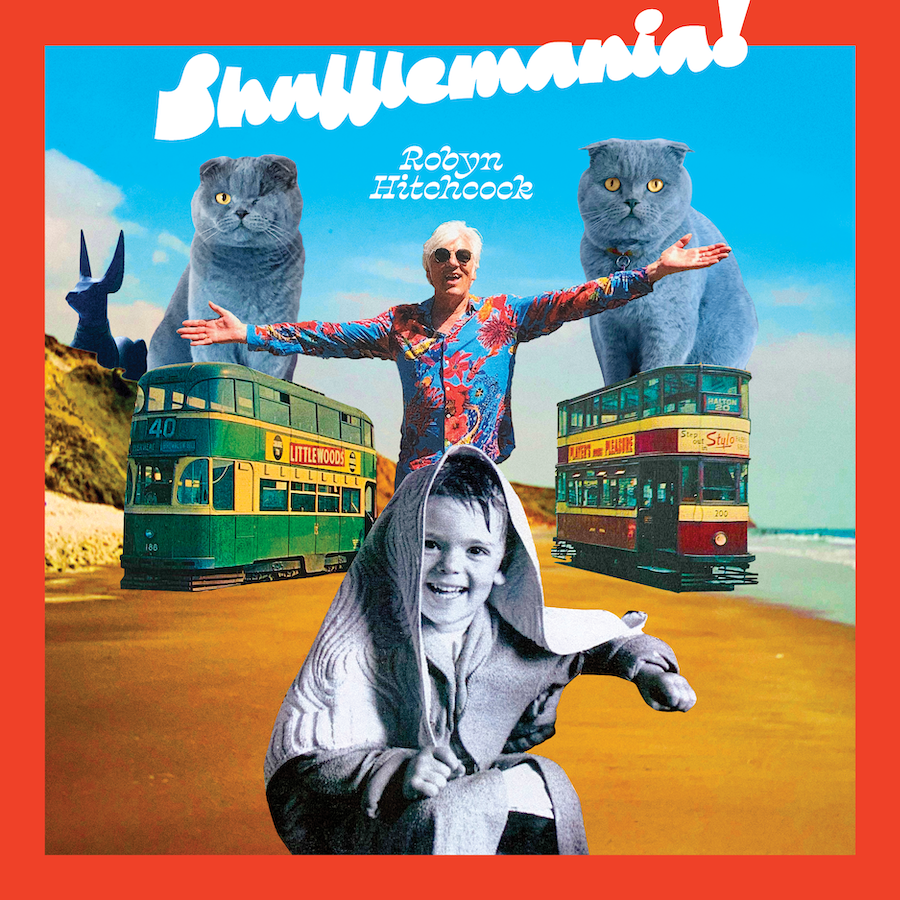 With 22 studio albums to his credit, and the subject of a concert film by Jonathan Demme, Robyn Hitchcock may be the most-celebrated British singer/songwriter that most people have never heard of. In the late 70’s, Hitchcock led a folk rock/psychedelic band called The Soft Boys, before going solo before making a handful of albums as Robyn Hitchcock & The Egyptians, who were former-Soft Boys’ Andy Metcalfe who went on to play with the band Squeeze, and Morris Windsor. By the late 90’s he was solo again, and was filmed playing in a concert for the 1998 movie, “Storefront Hitchcock,” then in the mid-00’s recorded a trio of albums with the Venus 3, which consisted of R.E.M.’s Peter Buck, Fresh Young Fellows’ Scott McCaughey, and Ministry’s drummer Bill Rieflin (who would later join up with Sleater-Kinney’s Corin Tucker to form Filthy Friends). In 2017, Hitchcock released a self-titled solo album, produced by Brendan Benson (best known as the other singer/songwriter guitarist in The Raconteurs), joined on vocals by his romantic partner/labelmate and a singer/songwriter in her own right, Emma Swift, as well as bluegrass and Americana vocalist Gillian Welch.

Shufflemania!, produced with Swift, finds Hitchcock taking advantage of his many music friends around the world, inviting them to collaborate and contribute to ten of his new songs remotely, describing the resulting 40 minute album on his bandcamp site as a “proper pop album.” The opening track, “The Shuffle Man,” sounds as if it could have been the kind of fast, early rock & roll songs played by Lennon and McCartney when they were still called The Quarrymen, before becoming The Beatles. Benson plays most of the instruments on that one, as well as another of the album’s rockingest tracks, “The Sir Tommy Shovel,” which Hitchcock wrote about the imagined British pub he wishes was just down the road. Benson reportedly tried to give that latter song a sound reminiscent of Hitchcock’s early days playing with the Soft Boys, which led to tapping the band’s original guitarist Kimberley Rew to play on it. As Hitchcock has described he sent acoustic recordings of his songs with scratch vocals to a variety of musician friends, sometimes adding other collaborations to fill out what had been added, and then took the finished instrumental tracks to London’s Abbey Road studios, where he fulfilled a longtime bucket-list dream, recording all the lead vocals there over a couple of days.

Hitchcock has reported that after the release of Robyn Hitchcock, he had not written many songs, but just prior to the pandemic in 2019 he’s visited the ancient ruins in Tulum, Mexico where he visited an impressive pyramid temple to a Mayan fertility god, Quetzalcoatl. A few weeks later, he recalls a dam broke in his writers’ block, writing “The Feathery Serpent God” in under a half hour, and over the course of the next year the rest of this album’s ten songs came to him. Hitchcock sent off “The Inner Life of Scorpio,” to former Smiths’ guitarist Johnny Marr, who happened to share that sign, and the multi-instrumentalist added piano, bass, drums and acoustic guitar to the song, then Hitchcock says he added the acoustic guitar solo.

Other musicians who contributed includes multi-instrumentalist Pat Sansone of Wilco, mix engineer and musician Charlie Francis, Dr. Dog drummer Erik Slick, and You Am I lead guitarist Davey Lane. Two of the most profound musical influences on Hitchcock’s songwriting over the decades has been Bob Dylan and John Lennon, which you hear most distinctly in “Midnight Tram to Nowhere,” with a Dylanesque harmonica over the folk/rock track, but Hitchcock’s bright tenor voice recalls Lennon’s way with a melody, which also shines in the fun folk rocker, “Socrates in Thin Air.”

A couple of other fine songs are inspired by Hitchcock’s interest in film noir and the writing of detective fiction writer Raymond Chandler, “Noirer Than Noir,” which has a lush layered sonic vibe that fits the films’ tone. “The Man Who Loves the Rain” borrows from a Chandler story title, beginning with the telling lyric: “Respect the dead/You will be joining them soon.” But for such a dark theme, it turns out to be one of Hitchcock’s most beautiful folk ballads, joined in vocal harmonies by Swift, even as he describes the fact that the storyteller has two graves.

As the record moves toward it’s conclusion, Hitchcock throws in another Beatlesque rocker, celebrating his own inspiration, “The Raging Muse,” drawing on a recurring dream he recounts where he’s at an old mill by the river and there are fish squirming across the lawn, perhaps another manifestation of his feathery serpent god. The set concludes with a truly Lennon-esque vision when “one day the ugly truth will be made over to beauty,” a utopian dream of a world set right, and to flesh out the arrangement, it’s Sean Ono Lennon who Hitchcock says added drums, vocoder, marimba, tropical sounds, and a bit of bass. It’s a hope for a world where “one day the color of your skin won’t be the great divide/And one day you’ll care about how other people feel inside.”

With the help of his many friends, Robyn Hitchcock has distilled his long and storied career into ten lovely musical tracks on Shurfflemania!. He may still have more records in his future, but here in 2022 he’s delivered a record that both celebrates his strengths as a musical artist and singer, and offers a fresh look at his unique, somewhat quirky view of life on planet earth in the best possible light.

Chris Staples – “Out Of My Body” [Video]