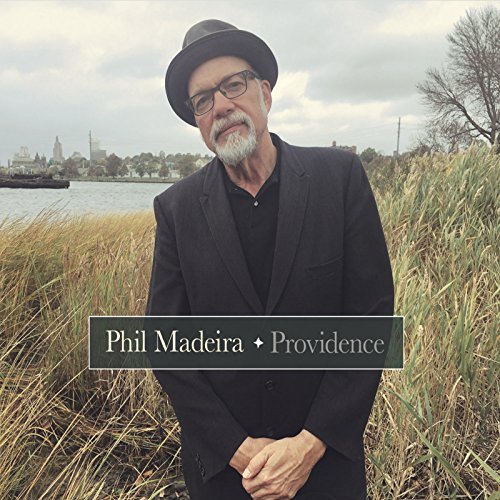 Fire Note Says: Phil Madeira, one of Emmylou Harris’ Red Dirt Boys, delivers an album of piano songs – that mix pop song craft with soulful jazz tendencies – about the town he grew up in, Providence, Rhode Island.
Album Review: Phil Madeira is one of those Nashville-based Jack-of-all-trades musical sidemen who shows up in Emmylou Harris’ backing band playing guitars, various keyboards and the accordion, but like a lot of those guys he’s had a long and storied career working on his own music, as well as supporting and producing albums for other artists. Madeira’s written songs that have found their way to albums by The Civil Wars, Kerosene Halo, and even Toby Keith, and he’s produced two albums of songs of secular spirituality called “Mercyland: Hymns for the Rest of Us” that have featured folk like Shawn Mullins, Buddy Miller, Rhiannon Giddens when she was back in the Carolina Chocolate Drops, The Wood Brothers, and of course Emmylou Harris.
For this latest solo album, Madeira returns to his earliest instrument, the piano, even though most of his songs written over his three plus decades in Nashville have been on guitar, to create a song cycle dedicated to the town of his birth. The result is some great piano songs that emphasize the beauty and dexterity of this amazing acoustic instrument, supported by the fine rhythm section from Emmylou’s current batch of Red Dirt Boys, bassist Chris Donohue and drummer Bryan Owings. Surprisingly rich in diversity, the album moves from the rock & roll rhythm of “Wicked Job” to the jazz inclinations of “Crescent Park” and “Rich Man’s Town,” Madeira mixes in smart horn arrangements here and there for accent, and even invites friends like John Scofield, James Hollihan, Jr., and fellow Red Dirt Boy Will Kimbrough to add jazz-influenced guitar solos to a song each, but it’s really an album that celebrates great piano playing and all that it entails.
The playing is the most obvious draw here, from classically influenced flourishes to the jazzy piano soloing that shows up here and there and everywhere, which stands out in “Wide Eyed Dream,” which also shows off Donohue’s bass chops. But, there’s something to be said for Madeira’s clever lyrics and the strong biographical flavor that he brings to these places that stir memories and speak of life’s truest treasures, relationships that sustain us, and some that send us running in new directions.
Madeira reports in the liner notes that the idea of this song cycle came to him as he crossed a bridge over the Narragansett Bay, and sent him back to celebrate being “Back in the Ocean State,” ringing the universal chord familiar to any “Native Son.” He sings of working as a stock boy in a discount store’s warehouse, dreaming of making music for a living, and then of moving south to do just that in “A Rhode Island Yankee on Jefferson Davis Court.” We learn that he was the son of a preacher and piano teacher, had ancestors from “Gothenberg,” that we worked one summer as a Carney at an amusement park, that he married a girl from the rich side of town, fell in love with a Southern woman, has two daughters and looks back at life with more delight than regret. It’s a journey, rich in song and story, worth taking.
Key Tracks: “Wicked Job” / “Rich Man’s Town” / “Crescent Park”
Artists With Similar Fire: (Early) Steely Dan / Emmylou Harris / Bruce Cockburn
Phil Madeira Website
Phil Madeira Facebook
– Reviewed by Brian Q. Newcomb