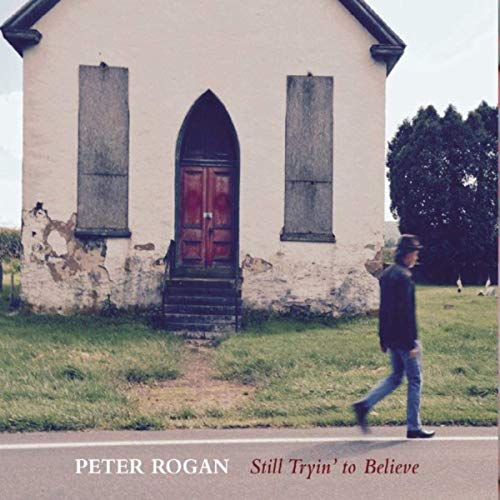 Fire Note Says: Philadelphia singer/songwriter/guitarist, Peter Rogan creates his first album with the help of the Red Dirt Boys, resulting in soulful light rock and blues.
Album Review: The very existence of this album by Reading, PA singer/songwriter/guitarist Peter Rogan should be an encouragement to anyone who’s wanted to make music, make art, write a novel, but put off that desire to express their inner artist and got busy with raising a family and making a living. After 30 years of playing guitar professionally in NYC and around the Philadelphia area, Rogan started working as an electrician at a steel mill in 2000, and only in the last few years began to show an interest in songwriting. After attending a songwriting workshop led by Nashville musician Phil Madeira who encouraged Rogan, he began writing songs with the goal of producing this debut album of original material. “Still Tryin’ to Believe is his labor of love, and a solid outing for a brand-new talent.
Musically, Rogan is drawn toward traditional rock & blues that lean a bit toward the light funk and soul often associated with places like Memphis and New Orleans. To create his debut album, Rogan turned to Madeira, one of Emmylou Harris’ Red Dirt Boys and a producer, session player and artist in his own right. Rogan travelled to Nashville to record the basic tracks with musicians long associated with Madeira, two from the RDB – guitarists Will Kimbrough and bassist Chris Donohue – and drummer Dennis Holt, then took home the recordings to add vocals and musical accents that give Still Tryin’ to Believe a more personal flavor.
The album’s title track opens the album with a loose funky guitar groove, with a soulful melody with nice guitar leads taking turns with Madeira’s organ fills, while a gospel chorus supports Rogan’s vocal. “The Only One,” a duet with Allison Dietz, leans toward country, with acoustics setting the pace, and solos played on a dobro and fiddle played by Rickie Simpkins. “Kickin’ the Can” is a talking and walking blues, again set to a funky groove, with organ accents, and a noisy pedal-effect enhanced guitar solo from Kimbrough and then one by Rogan, who does the slow-rap verses, then brings in a big chorus of backing vocals to deliver the pop hook chorus.
Several tracks lean toward traditional blues constructions to frame Rogan’s singing and playing, accented by his crew of support players, the light swamp rock vibe of “River Man,” to the funkier grind of “The Rolling Mill Blues,” to the percolating percussive beat of “Sweet Baby Blues,” and “Big Green Rambler,” one of 5 songs co-written with Madeira, where that organ and mix of guitars set to a catchy beat lay a pretty reliable foundation for Rogan’s lyrical songs which range from more serious story-telling to whimsical.
The light pop rock of “The Start of Something Easy” and the ballad “Beautiful Honey,” offer Rogan a chance to express his romantic side, while “Mercy” takes a darker turn, with the Gospel choir crying out on the chorus, and setting the stage for Rogan’s heaviest, strongest guitar solo. The album closes with a jazz tribute, “Song for Keith,” recorded with a completely different set of players, creating an altogether different tone from the rest of the set. Peter Rogan’s labor of love introduces us to a new artist, who brings a life time of experience into the light for the first time, but likely not the last.
Key Tracks: “The Start of Something Easy” / “The Only One” / “Kickin’ the Can”
Artists With Similar Fire: Phil Madeira & the Red Dirt Boys / James Taylor / Bonnie Raitt
Peter Rogan Website
Peter Rogan Facebook
– Reviewed by Brian Q. Newcomb