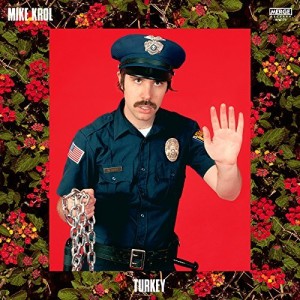 Fire Note Says: Mike Krol gives you a short but fun fuzzy rocker in Turkey.
Album Review: 19 minutes. That is what you get on Mike Krol’s Merge debut Turkey. 19 minutes of feedback heavy indie rock that catches your ear fast and then quickly dissipates. This is Krol’s third album overall, so he is not new to the game but had to feel some pressure releasing a record with a higher profile label like Merge.
Turkey plays in the vein of Ty Segall and King Tuff, so if you are a fan there is no reason that Mike is not for you. The first three tracks are killer with their high energy, great lyrics and confident vocals. “Neighborhood Watch” starts off with a muffled Krol singing “You better watch your back – cause I’m coming for you” with a slightly psychedelic effect before the track kicks up and we hear more about the heartbreaking bike theft. “If I see you on it, I’m going take you to the ground and make you – say my name” Krol sings with a passion as he plans his redemption against this low level dirt bag. Brilliant!

The rest of the short record plays out how you might think with quick bursts of tracks that become slightly predictable like “La La La” and “Less Than Together” before the final non-track “Piano Shit” concludes Turkey with a bit of humor. The record is a great introduction to Krol and I am glad to see Merge taking a risk on his style. Turkey is a great start to bigger things and nothing on here will keep me away from checking out Krol’s next record. Personally it is greedy but I just want more output next time.
Key Tracks: “Suburban Wasteland”/ “Neighborhood Watch” / “Left Out (ATTN: SoCal Garage Rockers)”
Artists With Similar Fire: Ty Segall / Warm Soda / King Tuff

Low: Ones And Sixes [Album Review]