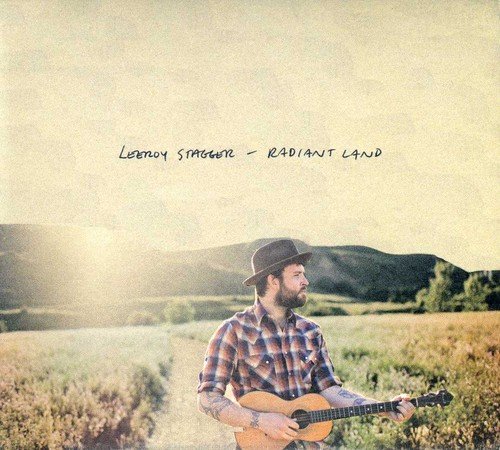 I am not sure how many times I have to say it but I still can not believe that Canadian singer/songwriter Leeroy Stagger does not have a bigger following. He has consistently released solid records with his roots-rock Americana style and has all the sentiment and attitude of a Ryan Adams combined with a weathered vocal delivery like Patterson Hood. His albums always engage the listener and he is not one to back down from telling any story so I sit here a bit perplexed listening to album number seven, Radiant Land. I say perplexed because once again Stagger delivers 100% and possibly has written and performed his best record to date, so it just gets to me that more people have not taken a listen!

Right from the opening upbeat foot tapper “Dirty Windshields” you hear the realism that Stagger offers on his tracks and in this case documenting his life on the road. On “Maria” he simply phrases it as “Maria you’re out of my mind” in the chorus about a relationship which doesn’t work and the mental and physical separation that goes along with that life challenge. Leeroy is not shy here about his politics either as clearly Stagger’s feelings on “Capitalism (Must Die!)” is self explanatory while he once again asks good questions on the politically charged title track but he hits more home runs on Radiant Land when he successfully pulls the personal strings right to the core.

It is this softer side of Stagger which provides the cohesion on Radiant Land and keeps the listeners attention. Radiant Land also succeeds because Stagger not only sounds more comfortable and loose but includes plenty of harmonies and an array of backing instruments which gives this album more depth compared to some of his previous efforts. I am not sure if Leeroy Stagger will ever break out to a bigger audience but it definitely is not for lack of talent. Stagger has released one of his best albums to date with Radiant Land and if you are into solid roots-rock Americana you can not go wrong checking Leeroy out for yourself!