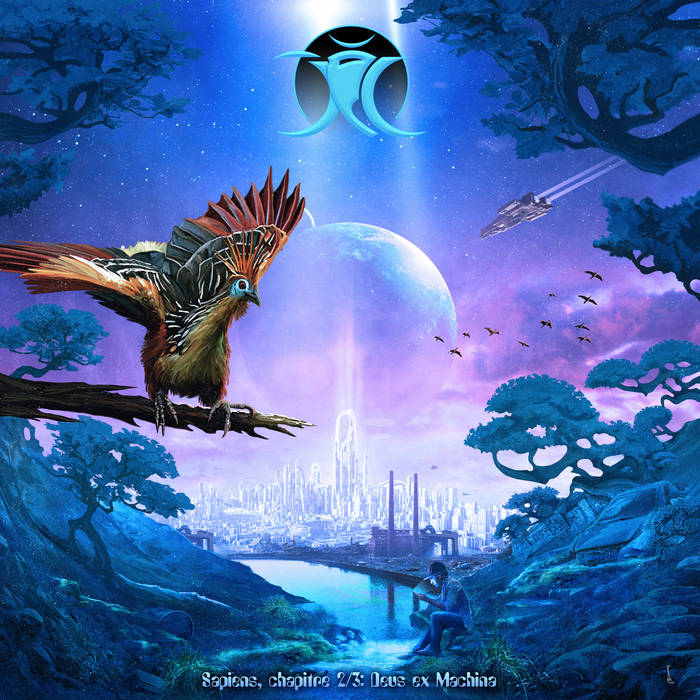 Coming in hot after last year’s Album Of The Year designation, JPL has unleashed part two of his Sapiens space rock opera and it hits hard and fast. The pressure of repeating a classic album is nothing new to Jean-Pierre Louveton though. Back in 2006 his band Nemo topped the ProgArchives charts with Si Partie 1 and followed that masterpiece up with Part Two the next year (which currently sits at #27 for 2007.) Although the Prog consuming public disagreed, I thought it was a much better album. Now JPL is in the middle of a trilogy and once again he has defied expectations and released a monster. But how does it stack up against its mighty predecessor? Let us see.

This is, unbelievably, JPL’s tenth solo album. Add that to Nemo’s nine terrific albums (and two very underrated albums with Wolfspring) and you have a body of work that rivals the very best. And yet JPL remains in the shadows – even in the Prog community. Sticking with French is undoubtedly the correct artistic choice but does precious little to raise his status and recognizability outside the Francophile world. JPL’s vocals are, as always, impassioned and beautiful. The great tradition of French Prog (from Ange and Shylock to Magma and Art Zoyd) can be felt throughout but Louveton is a modern man and his records do not sound like museum pieces. Like all his recent solo records, JPL utilizes the talents of two members of Nemo: keyboardist Guillaume Fontaine and drummer Jean-Baptiste Itier. The lines between Nemo and JPL are blurry, at best, but this is what chemistry sounds like – these guys have played together for years and it shows.

Right off the bat it’s clear we are in very different territory than Part One. The guitars are louder. The drums are more thunderous. The riffs are – well, riffier? After the opening track, “Le Flambeur”, one appreciates the debt JPL owes to Thin Lizzy but the classic rock vibes don’t last long. The next song, and lead off single “La Machine”, offers a window into a sci-fi voyage as it sounds very futuristic with bleeps and loops that rarely find their way onto a Prog record. Side One closes on a high note with the melodic “Une piece pour les gouverner tous.” I have no idea what these words mean and I guess I could Google it but I kinda like the feeling mystery and discovery that listening to Italian or French Prog gives me. Side Two is much closer stylistically to Part One. It’s more symphonic and expansive. “Terre Brulee,” in particular, reaches the lofty heights of that album. The album ends with its longest track (“Encore Humains?”) and it proves that JPL hasn’t forgotten how to write an epic. It closes out the album with a rather somber and pensive tone.

I’ll be honest here. This album baffled me a little bit at first. Being a longtime fan I thought I was ready for whatever JPL threw my way but was a definite curveball. I was initially disappointed as it doesn’t really sound anything like Part One. At the end of the day, that is perhaps its greatest strength. There are no recurring themes to lean on. The new material must stand on its own two feet. And it does. That Louveton can reinvent himself even within the confines of writing a three album trilogy is astounding and very brave. After a few spins I figured out a few things about myself and the way I listen to music. For one thing: most artists don’t care too much about what my expectations are. The truly great ones don’t care at all. JPL is fast becoming one of those other-worldly savants. And this: English is overrated. But don’t take my word for it though – go out and hear for yourself.