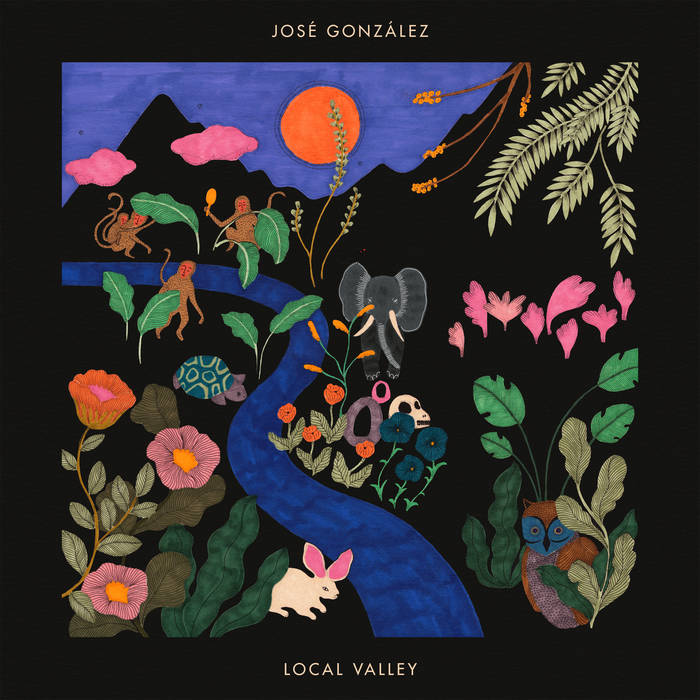 Swedish folk singer/songwriter and guitarist, José González brings his unique finger picking approach and take on world music to his fourth studio album on Local Valley, drawing on influences from Latin America and Africa. His fluid, often groovy approach to folk is enhanced by his six nylon stringed Spanish “classical” guitars, creating a pastoral instrumentals and more personally reflective blend of folk and pop, reminiscent of early acoustic Bruce Cockburn and the folk stylings of Sufjan Stevens. The thirteen tracks here do not suggest a step away from past work, but sees González continue his comfortable musical evolution, here enhanced by electronic percussion and looping his guitars one on top of another. While not a household name, the European artist of Argentinian lineage’s solo music and one track with his band Junip was heard liberally on the soundtrack in the Ben Stiller film, “The Secret Life of Walter Mitty.”

More or less the title track, “Valle Local” feels like a fast fun jam that is almost too brief. González sings the opening number, “El Invento” in Spanish, while his lyrics express a studied humanism and distrust of religious institutions that resist progress. The punchy beat of “Swing” lays the groundwork for a challenge to illiberal theocracies which seek to outlaw even dance videos set to the music of Pharrell Williams’ “Happy,” while “Void” takes on the cognitive dissonance present in so much of modern life, while González embraces a globalist secular view over traditional theocratic nationalism. In his music and in his lyrics, he embraces the natural world, from the inclusion of bird sounds, and a more rational and reasoned approach to the world’s problems. As he sings in “Visions,” in his music he is “imagining the worlds that could be/shaping a mosaic of fate/for all sentient beings.”

But González is not entirely captured by his intellect and reason, as he sings the somewhat playful “Lilla Gi,” repeatedly singing the name, in tribute to his daughter, while “Honey Honey” is written for his partner, Hannele Fernstrom, who adds her voice to “Swing,” but is also the illustrator who drew the album’s cover art. It’s not often you find an existential folk artist ruminating on the challenges that face the human race that is so light hearted and uplifting, but José González’s Local Valley looks at the world in all its complexity and uncertainty only to affirm those moments of light, love and connection that help it all make sense.