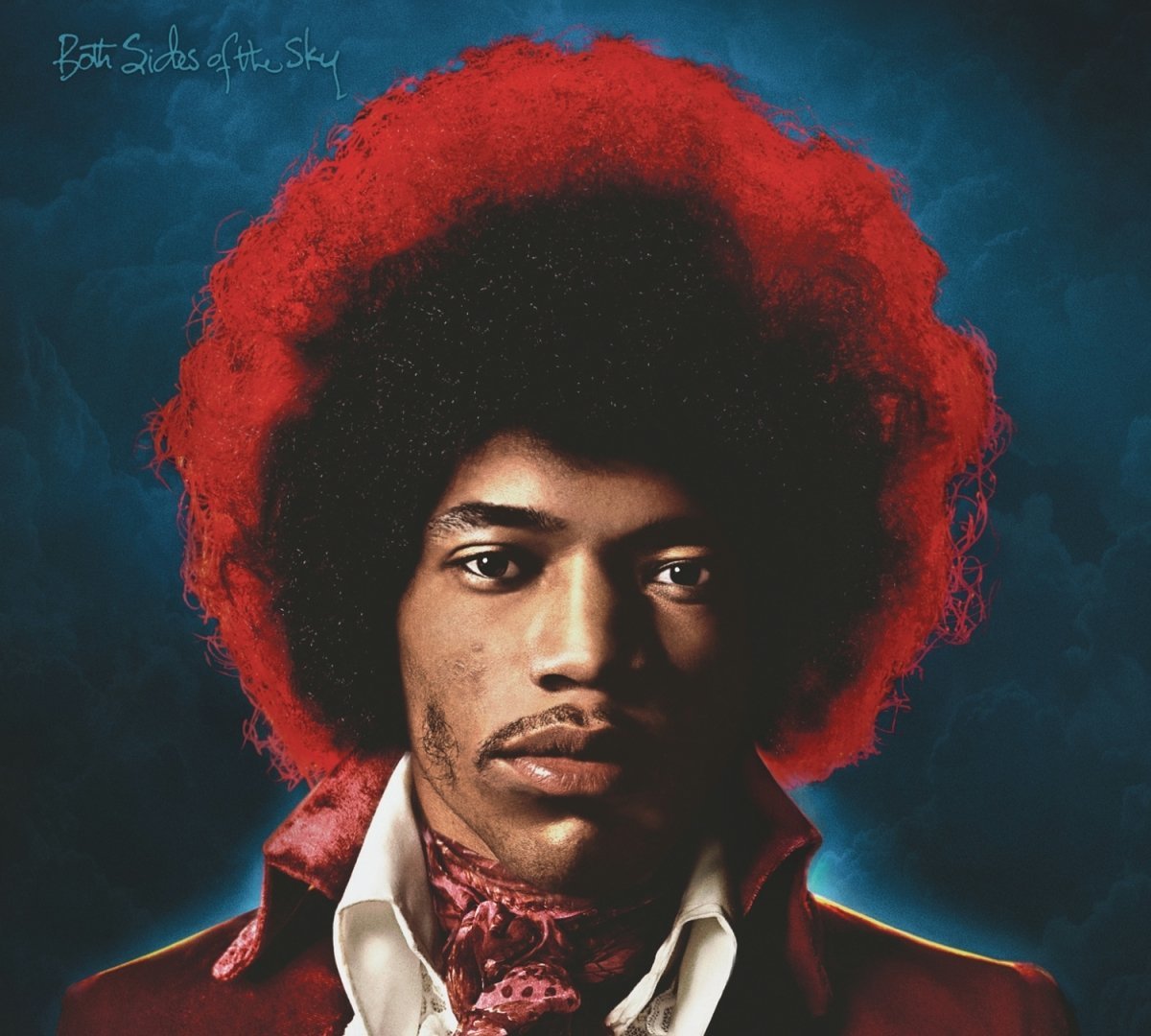 Jimi Hendrix
Both Sides Of The Sky
Legacy Recordings [2018]

Fire Note Says: Both Sides Of The Sky will be especially appreciated by collectors and hardcore fans who want to hear everything.
Album Review: It is strange here in 2018 to be talking about “new” music from Jimi Hendrix, who died tragically in 1970 after releasing only three studio albums and a live album with the Band of Gypsys in his lifetime. That said, it’s not difficult to imagine why there’s still interest, still a record buying fan-base. Nearly 50 years after his death, Hendrix is still praised by many as the greatest rock & roll guitarist of all time, as he was named by Rolling Stone magazine in their list of the top 100, published in 2003. By all standards imaginable, Hendrix was a virtuoso, an innovative instrumentalist who pushed the boundaries of what one could expect from the electric guitar, and the somewhat primitive electronic gadgetry available to him. Can you say “wah-wah” pedal?
But after at least 13 posthumous releases, some at a staggeringly poor quality, and at least 26 albums of live concert recordings, it’s a fair question to ask if there’s anything left in the cupboard worth our attention? And, strangely enough, the answer is yes. 10 of the 13 tracks on Both Sides of the Sky, including a rockin’ cover of Muddy Waters’ “Mannish Boy” and an original Hendrix blues, “Hear My Train A Comin’,” which at 7 and a half minutes is a sonic lesson in guitar heroics that would capture the attention of any fan of the instrument. Of course, some things here are interesting if extraneous, and Hendrix clearly loved to experiment in the studio, work out arrangements, look for new sounds, so like any other alchemist, not every combination produces gold. But the two above are worth the price of admission alone, and enough of the rest is solid enough to attract curious fans, of which I am one.
Two tracks find Hendrix jamming with Stephen Stills. On an early version of Joni Mitchell’s “Woodstock” recorded before he did the song with Crosby, Stills, Nash & Young, we hear Hendrix on bass, Stills playing an organ and singing, with Buddy Miles on drums, and no guitar. “$20 Fine,” is a relatively standard no-frills Stills composition, recorded on the same day, this time with Jimi playing guitar and Mitch Mitchell on drums, Stills still playing the organ and singing, and Duane Hitchings on piano.
The other two that feature noteworthy guest players have been heard elsewhere. Bluesman Johnny Winter (brother of Edgar), jams with Hendrix on Eddie James’ song “Things I Used To Do,” where most of the soloing comes from Winter’s slide guitar. “Georgia Blues” is a laid back Hendrix blues, featuring Lonnie Youngblood on vocals and sax. There are a couple of fun bluesy rock & roll songs, “Lover Man” and “Stepping Stone,” and there are a couple of shorter unexceptional instrumentals, “Jungle” and “Sweet Angel,” that may have been on their way to becoming great songs, but clearly were not there yet.
Which leaves us with “Send My Love To Linda,” which is a lovely song, but what we get doesn’t feel like a fully realized recording, and “Cherokee Mist,” a 7-minute guitar and drum jam that includes some sitar overdubs that do little to make it more listenable. It was the closing track, and after making it all the way to the end once, I started skipping back to “Mannish Boy” at the start of the album.
Perhaps a little inside baseball for the average music fan, but one of the fun aspects of this collection is that Hendrix was between bands more or less, so we hear him recording with his original Jimi Hendrix Experience crew – drummer Mitch Mitchell and bassist Noel Redding – and then with his Band of Gypsys mates, Buddy Miles on drums and Billy Cox on bass, mixing and matching as the occasions allowed. One thing that comes through is that Jimi Hendrix was a musician who not only had amazing talent, but he loved to play, that he liked to get players together and make music. If that had not been his driving passion, none of these recordings would exist.
Both Sides of the Sky completes a trilogy of archival studio recordings of previously unreleased material developed under the supervision of Hendrix’s sister Janie, and Eddie Kramer, a sound engineer who worked with Hendrix on all of the studio recordings he made in his too brief life. Valley of Neptune (2010), People, Hell and Angels (2013), and now Both Sides will be especially appreciated by collectors and hardcore fans who want to hear everything, but while they point in directions where Hendrix saw creative potential, sadly we’ll never know what could have been had he lived long enough to walk through those doors. Still, that recording of “Hear My Train A Comin’” is definitely as keeper.
Key Tracks: “Hear My Train A Comin’” / “Mannish Boy” / “Stepping Stone”
Artists With Similar Fire: Jeff Beck / Robert Plant / Eric Clapton
Jimi Hendrix Website
Legacy Recordings
– Reviewed by Brian Q. Newcomb