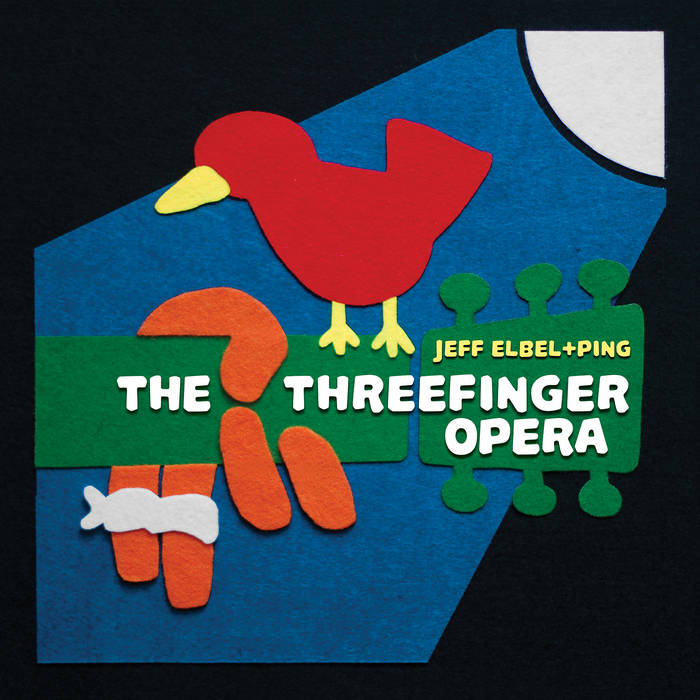 When life gives you lemons, the crafty among us make limoncello, the saying goes. If you have a talent for language and storytelling, you can turn any horrible event into The Great American Novel. But what if you are a musician and you have an injury that makes it impossible for you to play your main instruments? Well if you’re Chicago-based Jeff Elbel—who as a result of a spinal injury that created a bioelectrical dysfunction where messages from his brain were not getting to parts of his left hand, the one a right handed guitarist or bass player needs to play chords or notes on the neck of their instrument—you write a rock opera about your malady and the physical therapy to get back to where you want to be as an artist and a player. But where most of us might be tempted to write a mournful blues, an angry punk thrasher, or a sad-sack maudlin ballad, Elbel, whose musical history dates all the way back to the indie rock band Farewell to Juliet in the 90’s, and various releases with his band Ping throughout the 2000’s, has produced a bright, poppy collection of melodic rock that taken as a whole celebrates rich and varied gifts of life.

The story opens and closes with a brief spoken narration by Cy Curnin of the band The Fixx, whose British accent is a nice touch, I must say. As quick as the drummer can count four, the bright acoustic guitar folk rock rhythm of “I’m Gonna Be Like That” finds Elbel in duet with the warm female vocal of Maron Gaffron in duet, singing about the way a child dreams of being a hero or a maybe a member of the Beatles when they grow up, confident that “nothing is going to bring me down.” Similarly bright and poppy, “Unstoppable Me,” captures that confidence that “anything is possible” that possesses us in our youth, with more sweet harmonies, a ringing bell and this time a ukulele, and a lovely smart guitar solo, all optimism and light. A jazzy 70’s feel with spirited guitar fills in the vein of Steely Dan, with a Fender Rhodes piano solo and then a fiery guitar solo, as the lyrics describe the injury that struck “Like Lightning,” “it knocked me down, down, down.” The edgier grind of the Hammond organ driven rocker, “Mr. Madarakkis” introduces the villain, while our hero pleads that they not “put the screws to me,” and a torchy blues guitar solo fills out the picture.

It seems to be a good idea to get a “Second Opinion,” and this time Elbel leans on a syrupy country song with a weepy pedal steel, and you get the feeling that the songwriter has decided to play this for fun, whenever possible. Like writing an old school rock & roll song to his most uncooperative finger, “Lazy Louie,” with muted trumpet played by Calexico’s Martin Wink and a Chuck Berry influenced guitar solo. “Moan” is a close as Elbel gets to crying in his beer, but even it’s then he keeps it light and adds horns in a very Beatlesque reminder to moan if you have to, but smiles will take you further. The playful rocker “Rhyming Dictionary,” not only plays with words, Elbel affects a vocal style that’s just one degree removed from Weird Al to drive home the point. With more bright echoing guitars, Elbel and company honor the experience of the “Waiting Room,” the second home of anyone making daily visits to the hospital for treatment.

The album’s one cover song is “In Your Hands,” originally written and performed by Brian Healy of the indie industrial goth band, Dead Artist Syndrome. No doubt recorded as a tribute to Healy, who true to his band named escaped the mortal coil in 2020, whom Elbel and Ping had backed at some live shows. To put it mildly, in Elbel’s hands this song, with additional lyrics is all jangly guitars and harmony vocals, as if the Byrds had gone Top-40 pop, with a soaring violin for accent. The Threefinger Opera concludes with “Slowly but Surely,” is a gentle assertion that the hard ugly parts of life may slow you down, but shouldn’t stop us from doing what we love, again with Beatlesque horns, and a second trumpet solo from Wenk. In addition to his band Ping, which in addition to Elbel’s multi-instrumental talents and production skills includes John Bretzlaff on guitar, Mike Choby on keyboards, Stacey Krejci on bass, John Blum on drums, with Tom Sharpe on percussion, and Maron Gaffron on vocals, there are more guest performers than we can mention, but Elbel has managed to tap their soloing skills in ways that work seamlessly with in the musical contexts of his compositions.

On the whole, The Threefinger Opera, is a compelling and artful work by an artist who’s refused to let a physical disability limit his creativity, and whose undying optimism is almost so bloody cheerful that it’s hard to believe a record this positive, uplifting, and bright is coming out in the middle of this year. But it’s here, it’s fun, it’s very “positive, uplifting, and bright,” so it may seem incomprehensible the first couple times through, but in the end these durable melodies, smart arrangements and the message of hope overcoming despair is both timely and necessary. And if that’s not enough, Elbel tacks on a bonus track, “Do It Again,” another uplifting original in the pop rock vein of Crowded House, with all the Beatlesque harmonies and horns, driving home the fact that this guy is really quite unstoppably upbeat. It’s a bit annoying at first, but it’s growing on me with each listen.