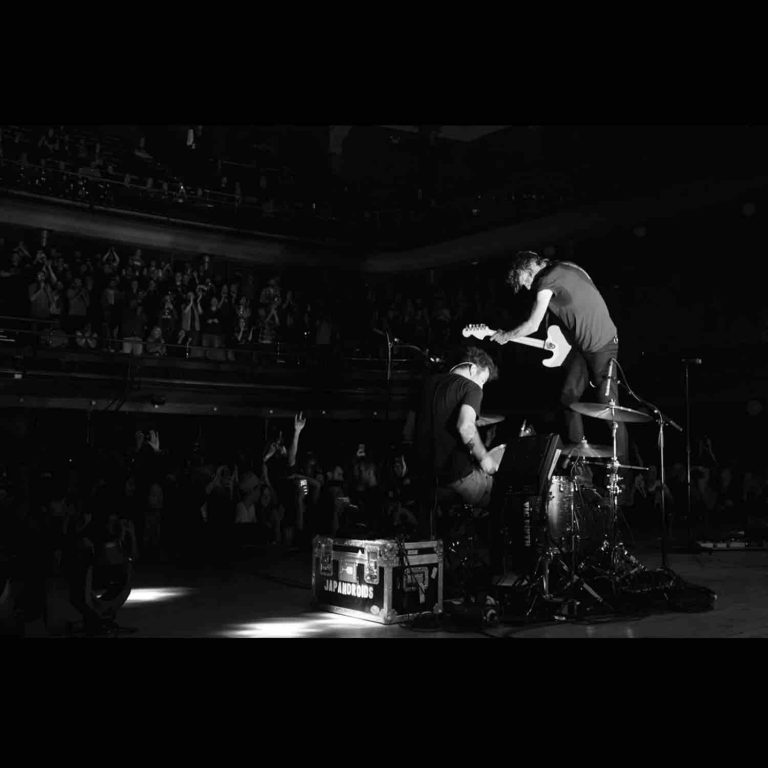 There’s a telling moment in Vancouver band Japandroids’ live concert album set, about three and half minutes into their third song “Heart Sweats,” where it feels like a natural ending. Drummer Dave Prowse stops playing and takes a long drink of water, while Brian King’s guitar’s power chords are sustained and echoing around the acoustically perfect venue while he sings what feels like the song’s final “ahhhs” and exhales a deep breath. But it’s not over, the duo barely skip a beat and they’re back into it, taking the last two plus minutes of the song to the next level, while the sold out crowd chant the chorus with them, “XOXOX/XOX Some hearts bleed/Our hearts sweat/XOXOX…” and so on, Prowse’s pounding becomes more intense on the drums, and King is strumming out the chords on his souped-up Fender guitar so fast it sounds like he’s playing lead. In those moments, we hear two talented rockers working to their strengths, revealing the dynamic possibilities of rock music played at its most raw and authentic.

While we can all think of a few successful two-piece bands, just guitar and drums that have made the most of their limitations – The White Stripes, The Black Keys and Local H come to mind – very few manage to pull it off, especially live. King and Prowse met at University of Victoria in British Columbia, Canada, in 2006 and settled in Vancouver, choosing to combine two band name ideas into the unfortunate moniker, “Japandroids,” which may be proof that all the good band names are taken. But the duo’s musical invenstrong DIY spirit, hard work and self-promotion has paid off with three solid studio releases and an impressive level of international touring. All of which has culminated in this career-spanning live set recorded live at Toronto’s 125 year old, famed Massey Hall, a national landmark, where historic shows by Canadians Tragically Hip, Bruce Cockburn, Neil Young and Rush have been recorded live.

Japandroids’ music rocks hard, with songwriting that echoes the classic guitar band approach of Springsteen and Petty, with some guitar sounds that lean toward metal, and songwriting influences from Minneapolis bands Husker Du and the Replacements. With just the duo feeding off each other’s energy, they manage to keep things interesting and compelling without the aid of bass player, lead guitarist or keyboards to mix things up or add additional flavors. Drawing on the strongest material from their 3 albums, Japandroids rise to the occasion of playing this phenomenal venue (I saw Cockburn play a solo set there in the late 70’s, and it’s got great acoustics), and bring together a solid rocking set that you can view a 36 minute rockumentary live concert video of on the band’s homepage, or listen to it here in its full hour-long glory.

Of course, in any rock band’s live performance, the chemistry between the players can often make it or break it, and that’s all the more true when it’s a duo like Japandroid. Early on, it’s obvious that Prowse lays down a solid groove that suits King’s natural rhythms, both on guitar and his often shout/sung melodic phrases. Prowse also sings, adding harmonies, and in a couple tracks – “Younger Us” and “Sovereignty” sings those big vowel “ohh’s” and “ahh’s” counter melodies that tend to become audience sing-alongs. And while the songwriting surely matters, it’s the primal energy and explosive emotions that are most compelling across the length of this set. All of which is a painful reminder of the loss of live music concerts that we’re all living through right now, but importantly it’s a remedy as well. There’s a lot of strong tracks here, the standouts include “Heart Sweats,” “Near to the Wild Heart of Life,” “No Known Drink or Drug” and their great ode to the touring life: “North East South West.” Usually, a live album tends to best serve as a keepsake for existing fans, but here Japandroids are putting their best foot forward in this live set, so it’s a great introduction to this fine rock duo.

Key Tracks: “Heart Sweats” / “Near to the Wild Heart of Life” / “No Known Drink or Drug”

Artists With Similar Fire: The White Stripes / The Black Keys / The Replacements