Interpol: The Other Side Of Make-Believe [Album Review] 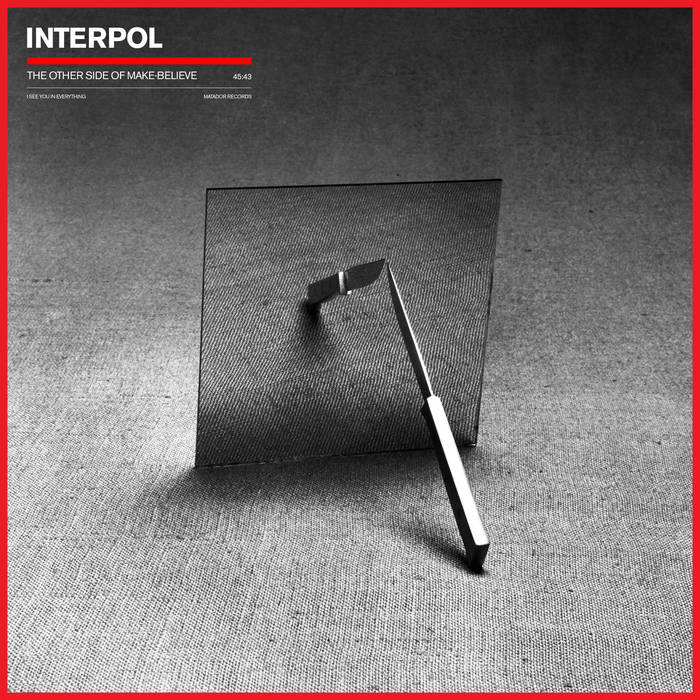 Interpol
The Other Side Of Make-Believe
Matador Records [2022]

On the easy-going final track of NYC-band Interpol’s 7th studio album, The Other Side of Make-Believe, vocalist Paul Banks sings, “I keep pushing it forward/all these obstacles in my way,” so perhaps the best advice given all of life’s challenges and disappointments is to “Go Easy.” In the label bio, he explains that while the band has written in the past playing together live, but the pandemic found them working individually and trading files over the internet, which gave Banks the unusual opportunity to fine tune his melodies without having to shout over a live drumkit. Of course, the trio eventually got together in a rural house before heading to London to record with Flood (DePeche Mode, U2, The Killers) and Alan Moulder (NIN, Wetleg, The Killers), and the result is an 11-track release that finds the band embracing a less intense, more atmospheric and melodic approach.

Interpol came up in the post-punk movement in the early 00’s, with early singles like “Slow Hands” and “Evil” marked by a defining guitar or bass riff from either Daniel Kessler or Banks, respectively, and a punchy, often powerful beat from drummer Sam Forgarino. While you will still find that approach here on numerous tracks, “Into The Night,” “Mr. Credit,” and “Renegade Hearts,” in many ways The Other Side finds the trio working to expand their musical vocabulary in ways that breathe more, and allow more room for Bank’s melodic ruminations. You still get a searing burst of five alarm guitar noise from Kessler here and there, as he does half way through “Big Shot City,” but the overall tone here moves more in the direction of the first pair of video singles, “Toni” and “Something Changed,” artful pop songs shaped around piano chording.

Another shift for a band that built its rep on songs that outlined the darker inclination among humanity, Banks suggests in the bio, the mounting sense of crisis on so many fronts leaving him feeling that “now is the time when being hopeful is necessary.” And if reality is marked by an increasingly violent response to the world’s fascination with disinformation and alternative “facts,” why not turn to “Fables.” The album’s third single builds on one of Kessler’s more intense guitar riffs that moves over four-minute course of the song from a relatively benign nursery rhyme melody to something fierce and piercing, as Banks sings that “It’s time we made something stable/We’re in a time of perfect danger/All is lost to the time beyond fables.”

Early listens to The Other Side of Make-Believe all you could hear is what was missing from what has come to define Interpol’s sound, based on their early, energetic, somewhat groundbreaking efforts. Digging into the tracks, catching more of the band’s instrumental engagement at work below the melodic surface, and getting a sense for ways that the trio is growing and evolving here on these more intimate, accessible recordings, reveals a more nuanced, engaging approach. Given the pace of life at the speed of light, perhaps we could all use permission to “Go Easy.”

Fire Track Premiere: Guards – “All I Have To Do Is Dream”