Guided By Voices
Suitcase Four: Captain Kangaroo Won The War
GBV Inc. [2015]
Fire Note Says: Suitcase 4 packs 100 songs into a nice 3 hours 31-minute sitting but was too big for just one of our GBV fan writers to tackle so we split it up – 4 Discs; 4 Writers; 4 Perspectives – all captured below!

Disc 1 Review: There is no question that Guided By Voices leader, Robert Pollard is super prolific but seriously, after all of the releases under the GBV belt there were another 100 songs just lying around the house? Well, the proof is on the record because that is exactly what we get on the fourth installment of the Suitcase series.
Disc 1 is a true kickoff and like the previous Suitcases that have come before it, the 25 song disc has some really great tracks that Guided By Voices fans will want to hear and own. Off the unreleased ’84 record, Pissing In The Canal you get “Walls and Windows,” which is an alternate version of “Hardcore UFO’s” of Bee Thousand (1994) fame while near the end of the record, “Hallway of Glass” has the salute and melody of “The Goldheart Mountaintop Queen Directory.” The original version of “Echoes Myron” is here, titled “Try Me On For Size” and from the working version of Alien Lanes (1995), Scalping The Guru, you get the more acoustic “Motor Away”, that still has all of its great components. These type of moments alone make Suitcase Four worth the price of admission.
The highlights on Disc 1 don’t stop there, as “The Garden” and “Murphy Had A Birthday” have the classic rock vibe comparable to the early material found on Forever Since Breakfast (1986) while some of the new songs, like “Deaf Dumb And Blind Girl” were recorded specifically for this collection with Ricked Wicky member Nick Mitchell. Just one spin is all it takes to realize that these are not just throwaways. In fact, I would say Disc 1 is a must listen for all fans.
– Reviewed by Christopher Anthony

Disc 2 Review: Fans of GBV’s Suitcase series already know what they can expect from any given disc in the collection: a few lost classics, some early versions of familiar tunes, sparse acoustic demos, rough and raw blasts of distortion-filled weirdness, and a few laughter-inducing moments too. Disc 2 of Captain Kangaroo Won The War is no exception, offering it plenty of the above and more besides.
First the lost classics: nothing fits this definition more than the lead-off track, the stellar “Lockets of the Empress” (premiered a few weeks ago on The Fire Note—check it out below). A jangly slice of REM-inspired neopsych goodness, the track is one of a few on Captain Kangaroo pulled from the band’s unreleased 1984 album Pissing In The Canal. Then there’s the back-to-back wallop of “Ode to J.D.,” an acoustic strummer that sounds like a Help!-era Beatles tune, and a previously unreleased take on the Power Of Suck track “I Am Decided;” it’s similar to the version on Suitcase 2, but features a much more prominent lead guitar. “Excellent Extension” is a track newly-recorded with Ricked Wicky wingman Nick Mitchell, and features some nice mellotron work and a laid-back vocal, while “Save My Life” is a live cut featuring the mid-80s lineup of GBV doing their best Joy Division impression. Another great track is “Time Will Destroy You;” based around a funk-influenced backbeat and a catchy guitar riff, this fuzzy power-pop diamond in the rough wouldn’t sound too out of place on Self-Inflicted Aerial Nostalgia. And while it may not be to everyone’s taste, I really like the snippet “Slave Boss Cranberry,” which is led by the proggy dual guitar attack of Doug Gillard and Nate Farley with a ragged Pollard vocal laid on top.
It wouldn’t be a proper Suitcase addition without some early versions of well-known tracks, and disc 2 has quite it’s fair share: “Good To Look” is an early, sunnier version of “The Queen of Cans and Jars” and is a fascinating look at the origins of the song—similar to the early take on “Tractor Rape Chain” included here, which is called “Clean It Up.” This take is different than the one included on the Darla 100 comp, however, featuring just Pollard on acoustic and vocal with Tobin Sprout on bass and moving along at a much faster pace. Other alternate versions include “Over and Over Again” (an early “If We Wait”), “Slow Dirty Water” (precursor to the Earthquake Glue track), and “Delayed Reaction Brats.” Finally, I’d be remiss if I didn’t mention at least a couple of the more hilarious moments on the disc: “Mystery Walk” is a tongue-in-cheek pop-rocker featuring Bob’s pal Randy Campbell on lead vocals (you might remember him from Suitcase 3‘s “Sonny the Monster), which contains lyrical gems like “Walkin’ down Mystery Walk / All you need is a piece of chalk / Walkin’ down Mystery Walk / It takes balls to / Walk down Mystery Walk.” Then there’s the disheveled “Hey You Know Me,” which finds Bob and Mitch Mitchell trading lines like “Greg Demos rocks / Look at his pants he rocks / He puts his rock ‘n’ roll clothes on” and “Kevin Fennell like the rock ‘n’ roll / Kevin Fennell he are the rock ‘n’ roll drummer for the classic lineup.”
– Reviewed by Simon Workman 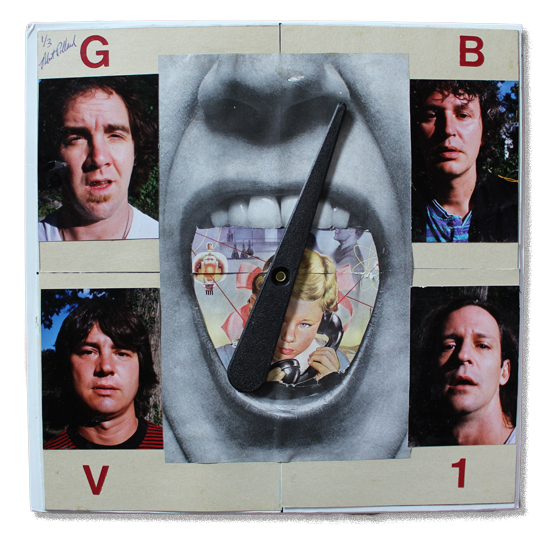 Disc 3 Review: I was pleased as punch to receive an email from the editor, asking if I wanted to review one of the discs for the soon to be released Suitcase 4. I am a big fan of the Suitcase releases, and was chomping at the bit to hear what treasures Bob shared with us, so of course I said yes.
That is what the Suitcase albums are all about, sharing unreleased, unheard tracks. This is Robert Pollard sharing with us GBV nerds. Nerds who always seem to need more songs; the geeks who revel in having the third or fourth version of a familiar track; the key losers who hear a riff or a melody on a Suitcase track and go on the hunt to find that snippet in their vast collection of all things Pollard and GBV. We need these songs and we will cherish them.
Will this material draw new fans? Maybe, but probably not. That’s not the point.
The quality of some of the recordings can be off-putting to the uninitiated. Some tracks are so lo-fi they would better fit in a no-fi category, but the GBV aficionados will eat it up. These tracks are the equivalent of receiving a napkin sketch from Picasso, maybe not the best-looking thing ever, but an artistic master created it.
Bob is the master of his medium. These recordings may just be doodles that end up becoming masterpieces.
Some of the standout tracks that I recognized immediately were “Bellboy Stomp” (by Union Bellboy) which is an instrumental version of “He Rises! Our Union Bellboy” from Class Clown Spots a UFO. “Yank for the Rooties” (by Ink Well Spinsters) is “Earmarked for Collision” from Boston Spaceship’s Let It Beard. This one stumped me for a few days; “Rock Time” (by Boy Rocker) is the rocking part from “We All Got Out (Of the Army)” off Robert Pollard’s We All Got Out of the Army. Thank goodness, some of the Suitcase orders had shipped from Rockathon and one of the GBV faithful was able to help me ID the song. A different version of “Quality of Armor” (by Pontiac Seagulls) was a most welcome surprise as well as a different version of “Glad Girls.” All music to my ears.
Some of the tracks I didn’t recognize but fell for were “Fall All Over Yourself” (by The Peter Pan Cans) a quick and poppy track, “Let’s Make Out” (by Hoarse Gorilla) is a muscular sort of rocker and the disc closer, “Frog Baby Axe Murderer” (by The Human Possible), is a monster track that stomps its way into your ears.
I am sure I will find more to love on this disc and the rest of the collection. It can take a while to take in all the wonders on a Suitcase collection, but, if you are a fan of the band, it is worth the time.
– Reviewed by Daniel Taylor

Disc 4 Review: Having only listened to the twenty-five songs on the fourth disc of the set I can’t judge how well these tunes compare to the seventy-five that precede them but once again Pollard has proven an endless stream of songs. With the second breakup GbV happening now a full year ago there can be no doubt that fans will be delighted by this box set. And much like the first three suitcases there is more filler to be found than on a proper Guided By Voices, Robert Pollard or Ricked Wicky album but that’s truly beside the point. Much of what makes Pollard so unique is his seeming inability to self-edit and with these excursions in vault emptying we get it all. Every wart, every blemish. And every moment of ungelded brilliance.
The songs on disc four range from full band skirmishes to acoustic ballads with frequent exercises in the bizarre. Some of the best come in the form of Pollard’s voice and his acoustic guitar. Among the gems of this type are “Promo Brunette” with its admonishment of the titular subject; “I never did like you” and the priceless “Your Cricket Is Rather Unique” which switches between gentle arpeggios and aggressive strumming while the degraded tape machine makes a mess of the whole thing. Classic. “Strange Games” is another acoustic track that is obviously an early recording as Pollard’s voice is considerably higher. The non-chronological nature of these sets highlights just how far Pollard has traveled.
Then there are the actual, normal sounding tracks – the ones with bass and drums thrown in. Most of these sound quite old and one, “Fame And Fortune” is credited as being by Bob’s pre-GbV group, Anacrusis. Others fare much better though. “Disappearing Act” is a simple song with a simple chord progression that Pollard turns into something special with its tempo changes and acute sense of melody. Perhaps the most fleshed out song here is “Third Grade Aviator.” Though less than eighty seconds long it exhibits all the trademarks of a genuine pop song.
Of most interest to the Pollard fanatics will probably be “Throwing Down The Line” which is a primordial version of the GbV favorite “Postal Blowfish.” Even in its early form it is obvious that this song was destined for bigger and better things. And so it is with most of these songs. The blueprints of greatness ooze from every pore and although there are some truly unlistenable moments (“Psycho All The Time” is one, for sure) there are enough glimpses of genius to make this a fun romp through the mind of the most gifted songwriter of our time.
– Reviewed by Scot Lade