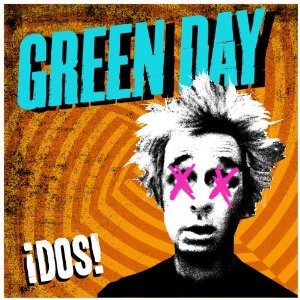 Fire Note Says: The second offering of the Green Day trilogy works harder to find its own identity.
Album Review: Green Day are back with the second installment of their trilogy, correctly titled ¡Dos!, and it once again throws caution to the wind with its free spirited vibe. This release of course is coming at you after the Billie Joe meltdown, Billie Joe in rehab and Green Day cancelling tour dates. With that said ¡Dos! has had very little press and feels like a surprise even though it was promised.
I am not sure all of the recent chaos surrounding Green Day discouraged this listen but where ¡Uno! seemed to have a fresh and fun retro approach, ¡Dos! has a more laid back pulse which never taps enough into the bands pop punk roots for my own taste. The album kicks off interesting enough with the acoustic intro “See You Tonight” that starts you thinking that round two is going to go elsewhere before it leads right into the pounding drums of the snotty 50’s rock styled “Fuck Time”. Green Day still bring plenty of attitude as they are never afraid to drop a cuss word here and there but the overall music on ¡Dos! never quite revs up like it did on ¡Uno!. This is really too bad because I was hoping for this section of the trilogy to forget popular culture and shows like the Voice and simply just rip it up.
Well ¡Dos! never goes to that punk extreme although it still should attract most of the current Green Day fanbase and encourage them to pick this record up for both loyalty and to continue the trilogy journey. Ultimately this middle section record could be the least memorable because even though it still is catchy in spots, ¡Dos! never maximizes the band’s potential. I am still holding out that next years ¡Tres! is the punk rock record from Green Day that I have been waiting on as it would be the perfect ending to this ever tricky trilogy!
Key Tracks: “Stray Heart” / “Ashley” / “Stop When The Red Lights Flash”
Artists With Similar Fire: All Time Low / Foo Fighters / Yellowcard
Green Day Website
Green Day Facebook
Reprise/Warner Bros. Records
– Reviewed by Christopher Anthony