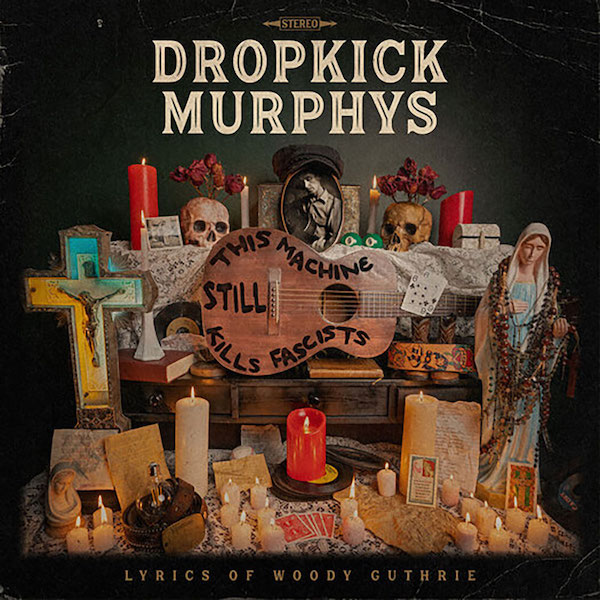 In 2003, Boston-based Celtic punk rock band Dropkick Murphys covered Woody Guthrie’s song “Gonna Be a Blackout Tonight” for their Blackout album, which brought them to the attention of Nora Guthrie, Woody’s daughter and Arlo’s sister, who’s also the President of the Woody Guthrie Foundation. In an effort to promote her father’s music and artistic influence, Nora had already worked with Billy Bragg and Wilco to take some of Woody’s lyrics and bring them to life, resulting in the album Mermaid Avenue in 1998, followed by Volume Two two years later. Guthrie invited Murphys’ lead singer Ken Casey to visit the Woody Guthrie Archive which houses 1000 or so of her father’s song lyrics, notes, and ideas to see what would catch his attention. He found a lyric about Boston which became “I’m Shipping Up to Boston” on the bands ’05 album, The Warrior’s Code, and was picked up to appear in Scorsese’s 2006 film, The Departed.

With Al Barr, the other lead singer in the band, on hiatus to deal with family illness, Casey and the rest of the band headed out to Tulsa to make a complete acoustic album of songs based on Woody’s lyrics, appropriately titled This Machine Still Kills Fascists, adding the word still to the slogan Guthrie painted on his guitars. Not only did Dropkick Murphy’s travel to Woody’s stomping ground to write these songs, but they recorded them nearby in fellow-native Leon Russell’s The Church Studio in Tulsa, while videos that accompany some of the tracks include scenes filmed in Woody’s hometown of Okemah, OK.

From the opening “Two 6’s Upside Down,” a story song about a guy’s bad luck that landed him in a “hard rock jail” for killing his ex’s lover, it’s clear that the Irish rock leanings of the Dropkick Murphys is a great fit for Woody’s working man lyrics. “Talking Jukebox” provides entertainment in a barroom, where hard working people come to drown their hopes for a better life, and listen to a song to lift their spirits for a nickel. While most of the record features acoustic guitars, mandolin, and banjo over the punchy rhythm section, “Ten Times More” is a nearly a cappella group chant set almost entirely to pounding drums, with a bit of harmonica, declaring that working class people have to work ten times harder than the rest. Given it’s an anthem sung by Irish Bostoners, it’s a reminder of an earlier time when an anti-immigrant sentiment led to “Irish Need Not Apply” signs posted in business windows.

While Woody Guthrie is remembered for his political songwriting, reportedly writing “This Land Is Your Land” in protest to “God Bless America” originally addressing the fencing in of so-called private property, and the issue of hunger among the nation’s impoverished, most of his songs address the hard knock lives of the common people, and especially their efforts to better their lives through labor unions. “All You Fonies” is addresses the owners who used violence to keep out the National Maritime and Seafarers International Unions that worked for living wages and fair treatment for merchant mariners, fishermen, and boatmen, because as they sing in “The Last Man,” “a working man’s hand is the hardest card in the whole damn deck to play.” For too many, Woody saw that the American Dream was out of reach, they could watch to company’s bosses drive a “Cadillac, Cadillac,” delivered like an old school rock & roll song, and dream about a car they’d never be able to afford. While the piano ballad sing along, “Waters Are A’rising” sounds like it could be an especially prescient ecology song, it’s actually about a ship that’s taken a torpedo hit, and “the old ship is going down.”

But Woody’s songs also took on the self-destructive behaviors that came alongside hard working and hard-living folk. The Irish leaning duet, “Never Git Drunk No More,” with guest Nikki Lane, captures two sides of a relationship, where the guy’s alcoholism is driving his partner away, with a nice penny whistle helping to carry the melody. Meanwhile, “Where Trouble Is At,” with a fast two step rhythm and accordion revealing an ugly secret behind most forms of folk music: dig deep enough and sooner or later you find a polka. To my mind, you just need to embrace it. The album closes with the Dropkick boys harvesting an original recording of Woody singing the verses addressed directly to “Mr. Hitler,” with the news that “we’re gonna lay you fascists down,” a World War II anthem that also feels especially relevant in our current day. While the ten-tracks race by in 30 minutes, This Machine Still Kills Fascists reveals again the vitality and relevance of the honest folk songs of Woody Guthrie, given a new lease on life in the vital musical settings provided by Casey and his band-mates: guitarists Tim Brennan, James Lynch, and Jeff DaRosa who also adds mandolin and banjo when appropriate and drummer Matt Kelly. And like the Wilco, Billy Bragg sessions, Dropkick Murphys have recording enough of Guthrie’s songs for there to be another volume in a year or so. This honest to goodness American working class folk music with a decidedly Irish lilt and a punk spirit, and it’s fun too.