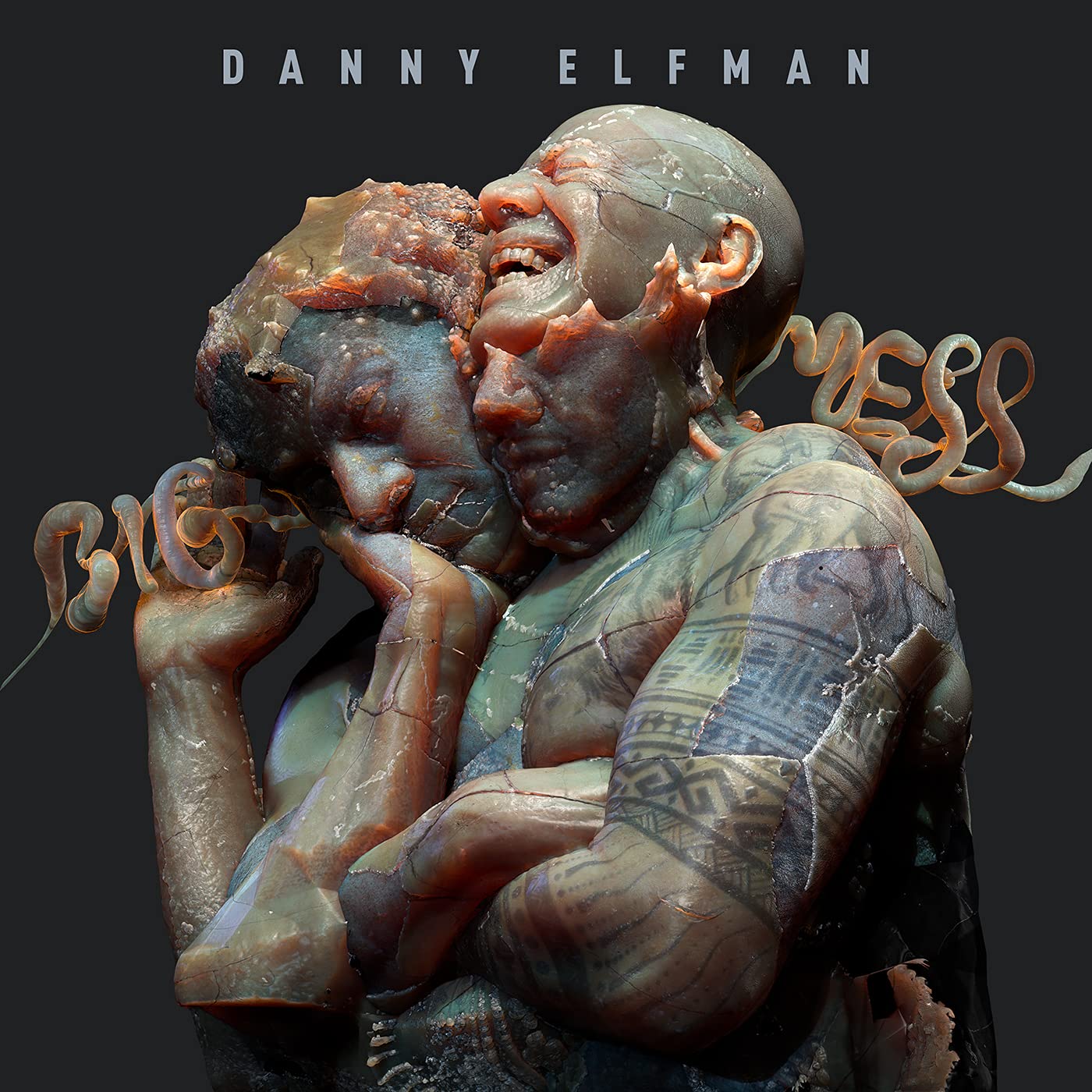 Rarely has an artist captured the tone and energy of their recording project as accurately and succinctly as Danny Elfman does here in the album title Big Mess. Of course, Elfman is best known of late as the composer of music scores for over a 100 films going all the way back to “Pee Wee’s Big Adventure,” on through all of director Tim Burton’s films, to action movies like “Mission: Impossible” and “Men In Black,” and serious cinema like “Good Will Hunting” and “Milk.” But of course, those of us old enough (and with enough brain cells left) to remember the 80’s, know Elfman as the leader and primary creative force behind the new wave and ska band, Oingo Boingo, which had alternative radio hits like “Dead Man’s Party” and “Weird Science,” which was the theme song for the film and TV show of the same name.

All of which is to say that Danny Elfman, apart from singing the part of Jack Skellington for Burton’s “The Nightmare Before Christmas, and performing that role/show annually at the Hollywood Bowl since 2013, hasn’t written or performed music in the rock or pop vein in over 35 years. So, after a long drought of live performances, Elfman had agreed to put on a retrospective live show at the Coachella Festival in 2020 and then on tour, mixing music and film in a program titled “Past, Present and Future! From Boingo to Batman and Beyond!” But when everything in 2020 dried up, Elfman found himself at home with a lot of time and a guitar in his hands. In an interview with music journalist Chris Willman for “Variety,” Elfman said he had one idea for a new original song for the Coachella set, mixing a chamber orchestra with an aggressive rock band, titled “Sorry.” When everything shut down for the pandemic, Elfman decided to write a few more songs in that vein, and the result is the sprawling two-disc, 18 song, Big Mess, where the singer/songwriter exorcises his demons over the current political situation of the last few years while coping with the creative isolation of the pandemic.

And the first thing to say about Big Mess is that you’d be quite mistaken if you were expecting easy listening orchestrations that might serve nicely as background music for reading and light conversation. I routinely listen to the albums I’m reviewing as I write, but Elfman’s intense compositions require, no, they practically demand your attention. In his interview, Elfman describes some of his work here as “chamberpunk,” and that gets at some of what he’s created. But the opener, “Sorry,” the first song written in this vein, opens with an edgy metal guitar riff suitable for the likes of Metallica, with a high pitched female vocal chorus singing over top, suggesting a serious blend of rock and opera. Add the robust rhythms of the orchestra matched by an aggressive rock band, and the sound at time leans toward the heavy progressive feel of Tool, some more frenetic tracks suggest the intensity of the industrial techno of Nine Inch Nails, while Elfman’s voice has tempered with age and often recalls the sultry, lower register of David Bowie.

Much of the musical inspiration, here, is Elfman reconnecting with the electric guitar, and then seeing the orchestra as an integral part of the band’s rhythm section. As for his own playing on the album, Elfman described his goal in the English police siren-like guitar solo in the song “True,” saying “you’ll probably hear still a little bit of wanting to sound like Adrian Belew. It’s still how I model a solo–allowing yourself to play phrasing as if it’s a melodic solo, but allowing wrong notes, and embracing them.” Elfman told “Guitar World” that his playing on the album accounts for all the “feedback and messiness.” For the more intricate and complicated guitar lines, he turned to guitarists Robin Finck (NIN, and Guns N’ Roses) and Nili Brosh. The rest of the band included drummer Josh Freese (Devo, Weezer, NIN), and bassist Stu Brooks (Dub Trio, Lauryn Hill), with Elfman doing vocals, playing guitars, synths, both composing and writing arrangements for the orchestra. In songs like “In Time” and “Everybody Loves You,” where Elfman’s deeper vocal range interacts most with the cellos and strings, you sense a real Nick Cave & The Bad Seed quality in the music.

Not surprisingly, many of the songs here tap the unusual zeitgeist of life in the pandemic and the complicated political world of 2020, either directly in “Love In The Time Of COVID,” or more generally in the complex, somewhat dystopian portrait that shows up in paranoid, nearly schizophrenic, and intense tracks like “Happy,” “Devil Take Away,” “Cruel Compensation,” or “Native Intelligence,” with it’s unusual image of “taking a bath in cyanide.” “We Belong” is the album’s one quiet, funereal ballad, but most of the record races along with an unmatched intensity. “Just A Human” and “Better Times” are driven by fast, melodic metal riffs with the orchestra amped up, while “Kick Me” is a full-on hardcore punk rant egged on by an orchestra playing hard, at full tilt. Here and often elsewhere, Elfman’s “chamberpunk” label makes perfect sense.

There’s no small amount of anger over America’s political crisis of the last election season showing up here and there across the album’s long 18 tracks. “Choose Your Side” actually samples a Trump speech declaring “It’s a great thing that’s happening for our country,” before wondering out loud about our potential slide into fascism, asking “when will we learn not to repeat/the same damn horrors from our past.” While likely written prior to the events of 1/6/21, “Serious Ground” describes a time when “the boots start hitting the ground/And the crowd starts making that terrible sound/The flags start waving with the fists in the air/And civilization dies, right there.” The final track, “Insects,” dates back to Elfman’s Oingo Boingo days, where “old white men” are power-hungry and driven by greed, and like mosquitos they want to suck the life right out of us.

As stated at the top, Elfman’s first solo project in 37 years, and his first rock/modern music effort after scoring and orchestrating over 100 films, is one gigantic, Big Mess. In the bio accompanying the release the artist himself says, “it was always destined to be this crazy cacophony,” and he’s not wrong. At 18 tracks, half well over the 4-minute mark, one over 7, it’s a lot to attempt to absorb, no less describe in a review. Suffice it to say, it may be one of the great releases of our current time, or perhaps we’ll come to see it as time capsule of the unique moment in time when the world was overcome by a virus. It’s going to take a while to shake out. But, if you like loud, intense music, there’s a lot to take in here, and there are moments of sheer sonic beauty and rich musicality, and many more where you’ll shake your head at the dark humor, anxious questioning, and remarkable timeliness of this masterwork, by one of our great, living composers.