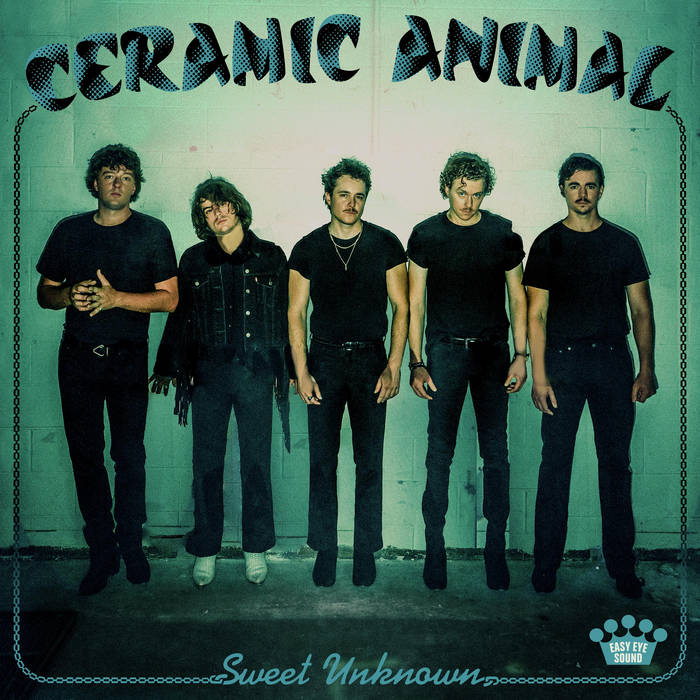 Ceramic Animal, the 5-piece rock & pop band out of Doylestown, PA, had already released three independently produced albums before signing with Black Key’s Dan Auerbach’s Easy Eye Sound. So they arrive on Sweet Unknown with a distinct sound and a highly developed sense of band identity that’s deeply rooted in their musical influences from the best rock and pop of the 70’s. The band’s core – three brothers – credit growing up listening to their late father’s superb music collection to instilling the strong sense of melody, the deft instrumental interplay at work in their smartly crafted songs, and that dodgy fashion statement of matching show suits.

For the band’s Easy Eye debut, singer/songwriter, guitarist, and lead vocalist Chris Regan, who had written and produced their previous recordings, traveled to Nashville to write with Auerbach and veterans Desmond Child, Pat McLaughlin, and Angelo Petraglia. Once they had the songs in place, the band – Elliot Regan on keys, Eric Regan on drums, Anthony Marchione on guitar, and Dallas Hosey on bass – came on board to make sure they sounded like Ceramic Animal songs, and the result is a solid ten-song collection of songs that display the band’s breadth of influences, from the countrified pop/rock sound of “Tangled,” the surf guitar feel that drives the faster “I Can’t Wait,” the late night urban Eagles’ vibe of the title track, or the big guitar pop/rock Stones-like anthem of “Valerie.”

Growing up in a suburb of Phillie, Ceramic Animal’s exhibit some of the melodic rock sensibility from Todd Rundgren, but you can hear a lot of those 70’s British bands, from T. Rex to The Kinks interspersed throughout Regan and Auerbach’s songwriting. Lyrically, there’s a theme of yearning, an underlying lust and longing, running just below the surface throughout, that gets named directly in “Forever Song”: “Looking for something/Looking for someone/Someone like you,” before expressing the power of music to bring people together, “Strangers dance like soulmates to a forever song.” Whether your night is going “Up in Smoke,” or you’ve found your own “Private Dancer,” there’s a sense of desperation expressed across the board on Sweet Unknown that most warm-blooded mammals can relate to at one time or the other. Ceramic Animal has developed a sound that lands nicely in that bittersweet spot all too familiar at 2 am, where the best rock and roll meets the unspoken longing for connection and a warm guitar solo and a sing-along lyric that “Maybe I’ll make it on my own” is just enough to get you through a lonely night.