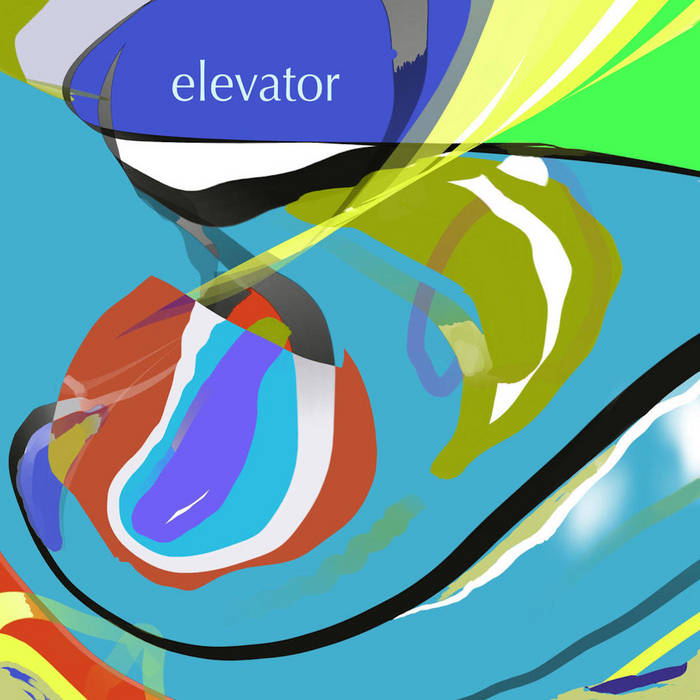 Adrian Belew may have played an essential role in King Crimson’s 80’s revival, accompanying Robert Fripp into the 90’s and early 2000’s, but the celebrated guitarist was first “discovered” by Frank Zappa, and went on to play supportive roles alongside David Bowie, Talking Heads and the Tom Tom Club, Laurie Anderson, and has performed on recordings by a diverse array of artists from alternative rockers Nine Inch Nails, to pop songwriter Paul Simon, to prog-rock Porcupine Tree. As a guitarist, Belew’s technical virtuosity together with his unique ability to deliver sonic effects, like his imitation of an elephant in the King Crimson track “Elephant Talk,” as well as various trains, planes, and automobiles, makes him a unique talent. He’s also a capable crafter of pop/rock songs that reveal the strong influence of The Beatles, as well as many of those he’s worked with. In addition to leading his own bands, GaGa and the Bears, Belew has a major catalog of his own work, making Elevator his 25th solo project, wherein he writes, sings, plays all the instruments, and produced.

As you might anticipate given Belew’s varied music experience and contributions, this 12-track collection is smart, eclectic, and electric. The album opens with its first single, “A13,” which mixes media, putting a catchy pop melody over a fast, high-energy riff, throwing in a train sound effect at the beginning of a smokin’ guitar solo for good measure. “A Car I Can Talk To,” a fun song about our advanced technology, builds on a quick rockabilly bass line, and while it’s got a catchy pop hook, it’s Belew’s fast, frenetic fret work echoing some old school surf riffs and incorporating the sound of a car horn that compel repeated listens. As the title of “Backwards and Upside Down” suggests, Belew’s reflection on a world in an Escher drawing, has some of the guitars running backwards. Fast, furious tracks like “Good Morning Sun” and “Attitude,” with kinetic melodic bursts, reflect the influence of Zappa, while the quieter, more meditative “Beauty” and “The Power of the Natural World” capture Belew’s way with an orchestrated melody and genuine interest in taking pleasure in all that surrounds us.

In the fun, electronica synth pop of “The Saturday Morning Roar,” Belew answers the question “what do I want to say,” with the thoughtful reminder to “be nice, and know what you’re talking about,” an excellent piece of wisdom for online dialogue. For the quirky “Taking My Shoes Out for a Walk,” Belew entertains his bias toward goofy rhymes as in “I myself spotted an ocelot/not sure if it was lost or not/but I thought, I bet they cost a lot.” “Back to Love” places a somewhat sentimental lyric over a repetitive piano run, while on acoustic guitar tracks like “You Can’t Lie to Yourself,” Belew’s vocals and melody recall the influence of McCartney and Lennon, which can be felt throughout the album. “Elevator” closes with “Seventy Going On Seventeen” again mostly on acoustic and piano, which finds Belew in full on McCartney pop mode taking on the issue of his age, saying “I have no shelf life, so I don’t know when I expire/until then, I intend to light a fire/underneath myself,” adding that “I’ve got of kid in me/I’m full of curiosity/about life’s little mysteries.”

While Adrian Belew is all over the map on this latest record, allowing his musical muse to pull him in every which direction, Elevator works as a whole, that celebrates the diverse talents of this artist. It’s Belew’s playful, even youthful approach, and high level of musical ability that makes it work at every level, in every song. The multi-instrumentalist has produced another crowning achievement; one that displays his versatility, virtuosity, and natural wit in fun, artful, yet accessible rock and pop music that should win over new listeners. The album is available now as a digital download, but CDs will be available this fall, with booklet to include 38 of Belew’s digital paintings. Also this fall, Belew, who’s currently on tour with his own music, will be joining a band featuring Todd Rundgren and Royston Langdon of Spacehog, to do a tribute tour celebrating the music of David Bowie. It’s a good thing, Belew is feeling young at heart.