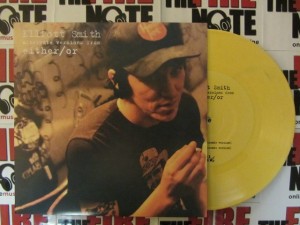 This was a nice Record Store Day release for me as anything by Elliott Smith is an instant draw. The songs here have been available digitally before but now they get the premium treatment and have their very on vinyl home.
The tracks here are exactly as titled as the 7-inch features different versions of “Angeles”, “Alameda”, “Ballad of Big Nothing” and “Punch and Judy” from Smith’s 1997 record Either/Or. Most of the songs are close to their originals like on “Alameda” you get a few different lyrics but the song is still as heartbreaking as ever. “Angeles” puts Smith’s vocals out front a bit more which definitely highlights the lyrics even more while “Ballad of Big Nothing” also gives you a slightly different vocal. “Punch and Judy” is the biggest change here as it is a complete reworking of the Either/Or version and is now more upbeat while taking on a new life here of its own. 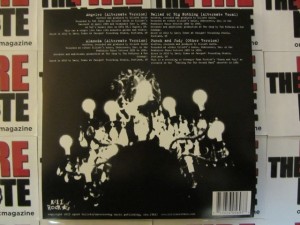 The jacket is a fold over style with art on the front and back. The vinyl is bright yellow and this Record Store Day release had a limited pressing of 3500 copies. This 7-inch is geared more for collectors as nothing on here is essential but even these different takes showcase Smith’s pure talent and the 7-inch is well worth adding to anyone’s record stacks!
Kill Rock Stars
-Feature by Christopher Anthony