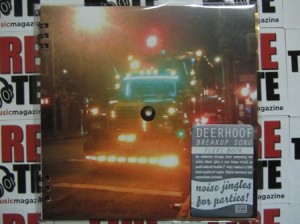 In the world of vinyl something unique most certainly will grab our attention. That is the case with the newest album from Deerhoof titled Breakup Song that was originally released on Polyvinyl Records back in September. This new format of Breakup Song was issued by Joyful Noise Recordings and is a 12-page spiral book containing each song from the album on a multi-colored, single-sided square 7-inch.
You might think this will not work but the entire book folds over and fits onto your turntable. Pretty cool from a design aspect and it sounds just like you have the actual wax spinning. This release was limited to 500 hand numbered copies and includes the bonus track “Just For That” exclusive to this release and not available digitally. The track itself is an instrumental jam of blips and bleeps but actually is a fitting ending to the indie pop record. 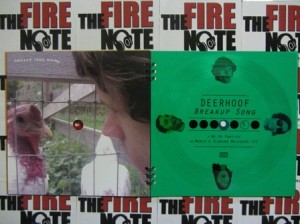 This version is sold out so if you want a copy start searching the Internet. If anyone ever asks you why bother with vinyl an easy reply is this release. It is a unique piece of art that not only has a great sound and looks cool but you can tell that a large amount of time went into producing this. Joyful Noise Recordings should be proud of this one and it is a nice addition to everybody’s vinyl collection. You can also watch the instructional video below if you have any doubts about this release!