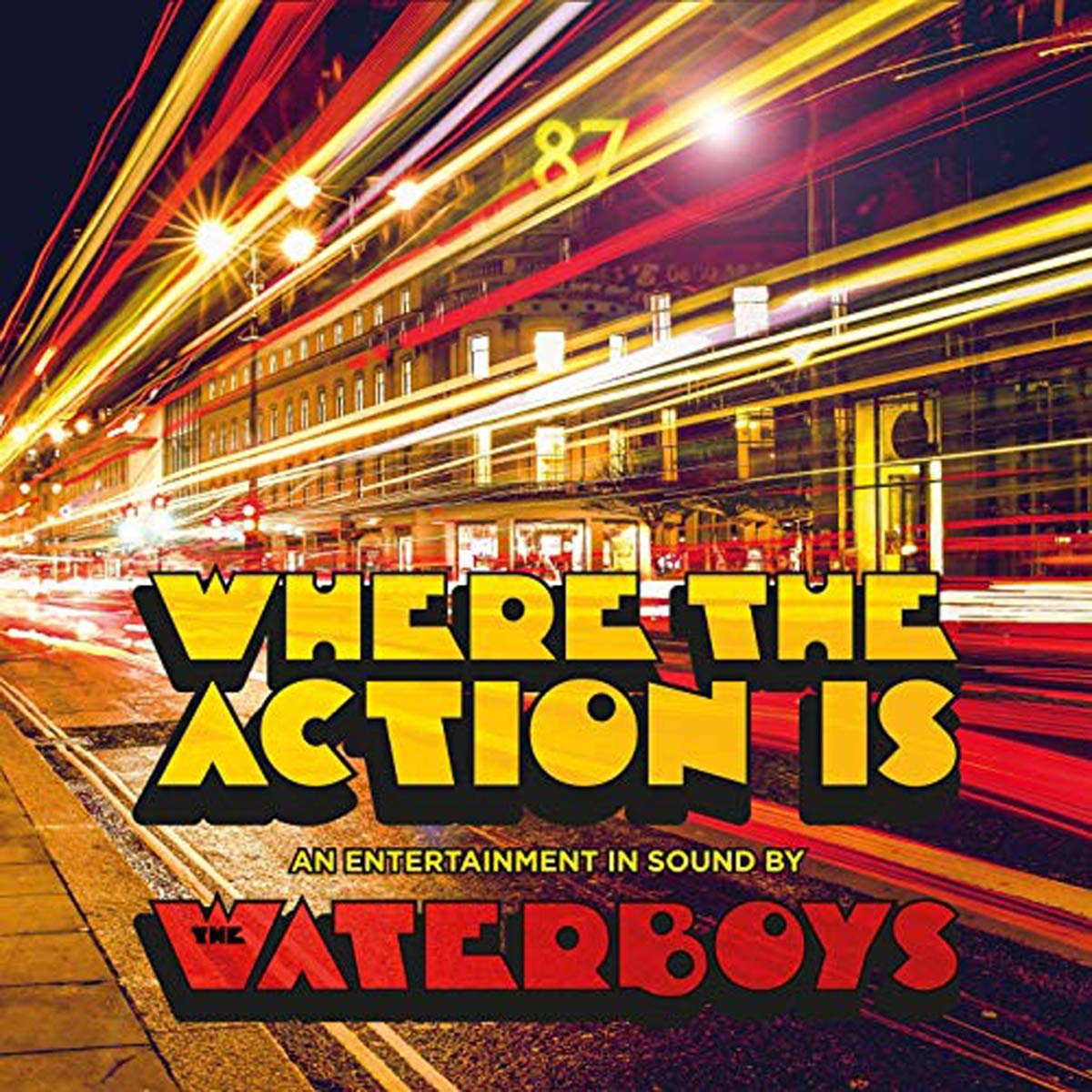 The Waterboys
Where The Action Is
Cooking Vinyl [2019]

Album Review: Irish rockers, The Waterboys arrived on the scene making “The Big Music,” in the same wave that introduced bands like U2 and the Scottish Big Country. A mix of punk DIY spirit with nods toward Celtic folk influences, The Waterboys sound is perhaps best defined by their biggest single, “The Whole of the Moon” (from 1985), which curiously enough was the recorded song that U2 used to take the stage on their last tour for “Songs of Experience.” For most of the band’s existence, The Waterboys have consisted of Mike Scott and whoever else was in the room, but in the early years included Anthony Thistlethwaite on sax, and Karl Wallinger on keyboards, who went on to form the Beatlesque Brit-pop band, World Party. One of Scott’s most recent collaborators is Steve Wickham on fiddle, who’s played on recordings by U2, Elvis Costello and Sinead O’Connor.

Where The Action Is is the fifteenth Waterboys album, if you include two that Scott made as solo albums in the late 90’s when the band was on hiatus. If there’s any doubt that Scott is still deeply connected to the “Big Music” that celebrates the Irish spirit and Celtic influences, you need look no further than the closing two songs. “She Made the Lasses O” is a traditional folk song with lyrics drawn from Robert Burns’ poem “Green Grow the Rashes.” Burns is regarded by many to be the national poet of Scotland who lived and wrote in the late 1700’s. The song is a brief two-minute jig, with Wickham playing the melody on the fiddle, but it fades smoothly into the next number, “Piper at the Gates of Dawn,” a nine-minute reading of a story by English children’s writer, Kenneth Grahame, from his novel, “The Wind In the Willows.” The story is told in spoken word by Scott, similar to works by Van Morrison, over a musical bed of piano and synths and electric fiddle that captures the mystical nature of Grahame’s tale.

But Scott isn’t entirely focused on voices from the distant past, as the album opens focused on Where The Action Is, a rocker that’s driven by Scott on electric guitar, and the strong Hammond organ swells of Paul Brown, and Wickham playing lead on what he calls the “Fuzz Fiddle,” no doubt running his instrument through a distortion guitar pedal. Here, as elsewhere Scott’s vocals are echoed by the Gospel-sounding vocal backgrounds of Jess Kavanagh and Zeenie Summers. The title track is followed by another hot rocker, “London Mick,” which celebrates Scott’s friendship and the abiding influence of Mick Jones, lead guitarist with The Clash, who went on to experiment with Big Audio Dynamite and other ventures. Scott remembers seeing “Spinal Tap” with Jones, and says, “If I had my choice I’d pick/some rock and roll from London Mick.”

For the six songs that flesh out the rest of the record, Scott strikes a balance between his Celtic folk and his punk rock influences, generally leaning toward a mix of folk/rock and pop songcraft. “Ladbroke Grove Symphony” is fast, urban shuffle that celebrates the “bohemian” London neighborhood where Scott lived when The Waterboys were recording their early break-out albums. “Right Side of Heartbreak (Wrong Side of Love)” leans toward R&B inflected pop, complete with horns, but “Take Me There I Will Follow You,” goes all in on urban hip-hop influences, with a sung Gospel-sounding chorus that has Summers and Kavanaugh repeating the song’s title, while Scott raps the verses. Scott moves toward more familiar Waterboys’ territory, a pop ballad in “Out of All This Blue,” while two more near spoken-word pieces that recall the work of Van the Man on “And There’s Love,” while “In My Time On Earth” he leans even more directly “Into the Mystic.”

It would probably be unrealistic to hope for Scott to match the majesty and strength of The Waterboys’ “This Is the Sea,” or even their Celtic folk traditional sound on “Fisherman’s Blues,” but here on Where The Action Is, he and Wickham and the others continue adding to the legacy of this under-appreciated Irish band, with solid song-writing and memorable performances.

Artists With Similar Fire: U2 / The Pogues / Van Morrison