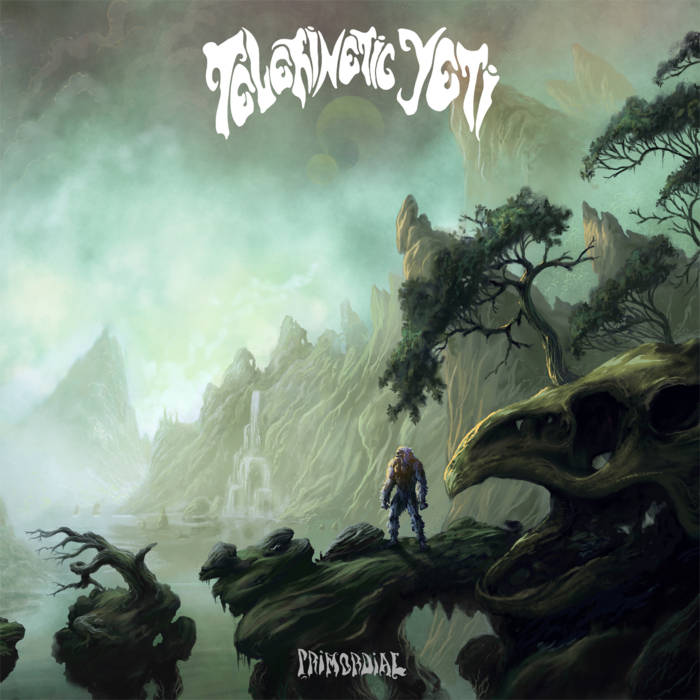 Unearthed and thawed from an ice shelf in Dubuque, IA, Telekinetic Yeti LIVES! The duo composed of Alex Baumann (Guitar/Vocals) and new member Rockwel Heim (Drums) takes on their second outing, Primordial. With one album, Abominable, released in 2017, Telekinetic Yeti only had room for growth and that’s exactly what they’ve done.

Primordial’s landscape paints a picture of ancient weed, false prophets, dark sorceries, frozen, baron wastes, and the human condition. As soon as the title track lumbers into your ears the “drop out of life” effect begins and doesn’t let up until the final notes of “Cult of Yeti.” “Ancient Nug” is great but, where the album really picks up confidence (for me) is the weed ode “Ghost Train.” The striding leviathan riff quickly gallops into early High on Fire grooves with unmistakable Sabbath worship. It’s the song that wakes you with a throat punch and continues the brutality. “Stoned Ape Theory” takes a turn into Mastodon territory with cathedral-like riffs that menace towards the skies and beyond. “Beast” ravages the ears with Heim’s tribal drums and Baumann’s hypnotic Sleep grooves. “Rogue Planet” is exactly that, a meteorite that smashes into your ears with a white hot intensity. “Invention of Fire” showcases the low end heavy that really solidifies the album. Counter that with sporadic, Sabbath based funk riffs and you have one of the album’s best tracks.

Telekinetic Yeti’s Primordial plays with familiar pieces of the genre. What really elevates it is the production value and capture of instruments. Yeti’s cosmic expanse really turns the album from repetitious to hypnotic. I have to say that after hearing that Yeti was a duo, I wanted to move on after hearing the title track. But I’m glad that I returned, the duo really showcases how to expand past the space. Primordial is a colossus that easily has a place in my end of the year list. The album isn’t just for listening, the band has created an expanse for you to traverse.