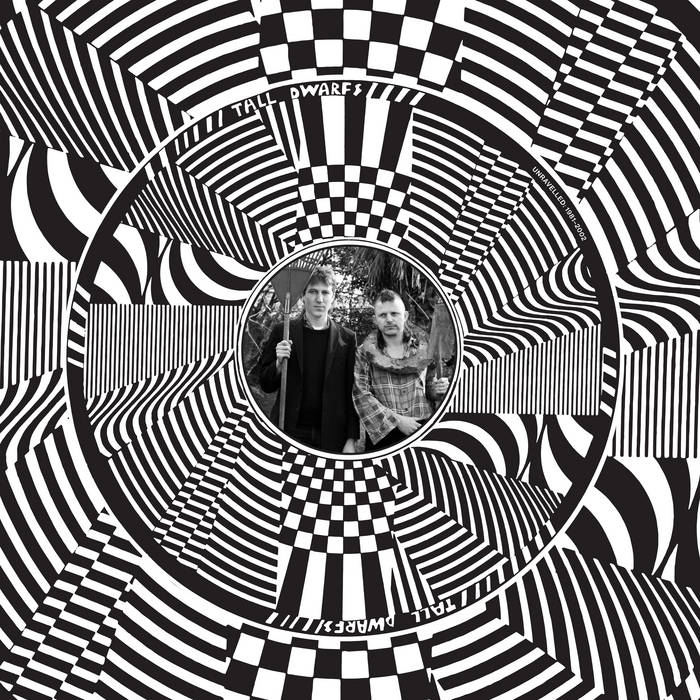 Curiously, I’ve come across a number of American bands who might have 3 albums in their catalog even though they’re playing to small crowds here at home, yet their bio suggests that they’re “big in New Zealand.” Well, Tall Dwarfs are actually a New Zealand band that likely you’ve never heard of. This quirky duo created enough of an impact via their Flying Nun record label to warrant the 55-song box set treatment 20 years after their last recording. The story goes that Alec Bathgate and Chris Knox, fresh from a flirtation with pop success in the band Toy Love, got together with some guitars and beer and a 4-track reel-to-reel and began to experiment with lo-fi recordings long before it was cool. What started as a one-off get-together of two friends quickly evolved into a 21 year collaboration that produced 8 EPs and 6 full length albums worth of tunes.

Limited to only four tracks of input, sometimes the Dwarfs relied on simple guitar parts, melodic vocals, the occasional electric guitar solo or Casio keyboard, and tended to rely on rhythm tracks that involved hitting pots and pans, empty beer cans or whatever was handy. As such, there’s a certain 60’s & 70’s folk rock innocence in Knox and Bathgate’s approach, a playful psychedelic vibe, and occasionally a bright bit of power pop brilliance like “Life Is Strange,” with bright electric guitars forging the way. On the other end of the spectrum, leave two guys unsupervised with recording equipment for too long and you’re going to get songs like “Attack of the Munchies” and “Gluey, Gluey,” a celebration of the mucous and other substances that come out of a guy’s nose and other bodily orifices. The song has a driving bassline, and what sounds like a melodic melody played on a kazoo; you may think it’s funny but its snot.

Spread over 4 vinyl LPs and 2 CDs, lots of these songs time out near the two-minute mark, but given the limits produced by a 4-track system, these Dwarfs prove quite creative, mixing curious rhythm noises and diverse keyboard settings. Given the trippy experiments, it’s almost surprising to encounter a catchy punk pop track like “Entropy,” with lots of electric guitar, a catchy rhythm track and bassline, and eventually a noisy guitar feedback driven solo. There’s too much here to describe it all, from the playful campfire sing-alongs of a “Bee to Honey” to the scary sci-fi thriller “The Brain That Wouldn’t Die,” but for the adventurous listener, there’s plenty here to put a smile on your face.

ARTISTS WITH SIMILAR FIRE
Modest Mouse / They Might Be Giants / Pavement