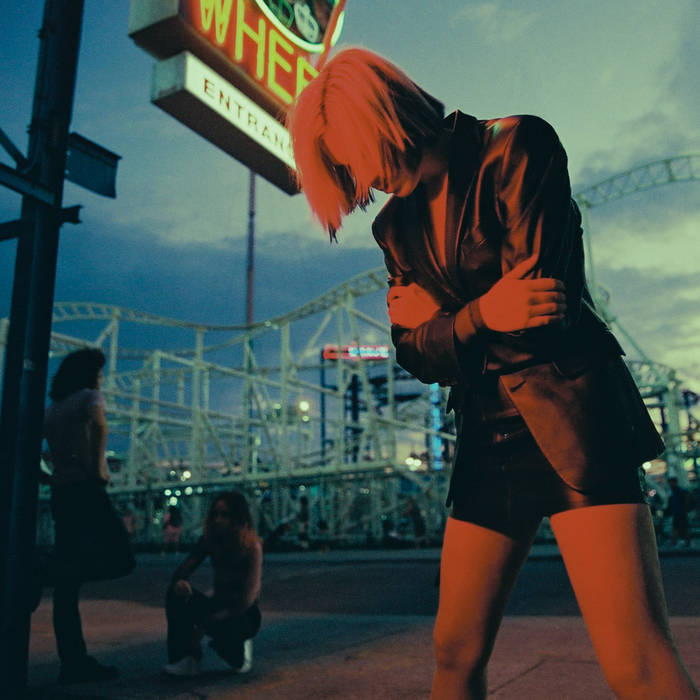 Like many smaller, working bands, the pandemic forced the power punk/pop trio, Sunflower Bean, to stop playing out, calling their future into question. The three members were forced into separate lockdowns while NYC shuttered all live music venues, creating identity crises for musicians that had been described as the hardest working band by a local show listing website. When they did come back together to work on their third album, a follow-up to 2018’s solid outing, Twentytwo in Blue, which they described as “an ode to the fleeting innocence of youth,” they had a deeper, richer, but also a darker story to tell.

In a story in RollingStone, the band outlines their individual struggles that fuels the creative impulses at work in Headful of Sugar. Julia Cumming, who plays bass and sings lead, started taking antidepressants and adopted a cockapoo. Guitarist and second vocal lead, Nick Kivlen came to terms with the loss of touring and assumed his career in music was over, while drummer Jake Faber came to terms with his trans identity, and resurfaced as female, changing her name to Olive. When the trio finally regrouped, they reacted to the events of their year in limbo with a more aggressive, more adventurous sound. On the eleven tracks, often with a denser, more textured approach, allowing more creative tension while still elevating the band’s signature pop melodies.

The album opens with Cumming singing the question, “Who Put You Up to This?” where she declares her intention to “let go for real” of a toxic relationship that keeps pulling her back in. Kivlen sings the hooky rocker, “In Flight,” where he comes to terms with the fact that he’s the last one left in a town were “people die or they move out/Everyone but me.” In “Roll the Dice,” the two combine their voices to rant against a capitalist society that’s little more than a casino, where “nothing in this life is really free.” Here, producer Jake Portrait with Faber engineering, layers in multi-tracked vocals and layered keys and synths, an approach they repeat often, like the percussive loops in the title track, an indictment of our cultural reliance on an industrial entertainment complex with little nutritional value.

“I Don’t Have Control Sometimes” is a return to bouncy, power pop with Cumming singing about coming to terms with more self-destructive patterns of behavior. In “Stand By Me,” she declares her romantic independence with a bold declaration that “You want me to stay in my lane/You want a girl who sits back and takes it/That’s not the way that I play.” She acknowledges her vulnerability with an acknowledgement that “I don’t want to be strong all the time,” before asking, “Are you man enough to stand by my side?” In “Post Love,” the band embraces more of R&B groove, while she comes to terms with another failed relationship: “Now you’re lying with another/Everyone lies to each other.” Kivlen provides a big, bold guitar riff to accompany Cumming’s pop melody and bold bassline in “Baby Don’t Cry,” just because “the radio in the back/It’s playing sad sad songs now.” Kivlen offers an even heavier guitar riff for “Beat the Odds,” where he sings one that in tone and tenor feels like Depeche Mode in guitar anthem mode.

The album, taken as a whole, finds Sunflower Bean coming to terms with the emptiness of modern life’s shallow commercial enterprise that attempts to keep us on the surface, always paying our share, playing by somebody else’s rules. They may offer a Headful of Sugar, but it leaves a depressing aftertaste, as Cumming sings in the ethereal “Otherside,” “There’s a hole so big I cannot fill,” which leaves each of us with “grief and tears I cannot hide.” The antidote as she sings in the set closing rocker “Feel Somebody,” is not to “keep replaying the same old games” but to stop worrying about “what you are trying to protect?” and turn toward the world and say “yeah, yeah, yeah.”

For a band with a name that sounds like they could be a Grateful Dead cover band, Sunflower Bean has cultivated a gritty, urban rock sound that embraces its creative instincts across the pop/rock spectrum, from noisy experimental psychedelic sounds to full on punk energy that never overcomes their melodic sensitivity. Twentytwo In Blue was a strong, accessible pop/rock album that took the band to the next level commercially. Headful of Sugar raises the ante, adding a level of musical complexity and creativity to an already road-tested approach. The increased self-awareness and social critique here, requires a bit more listener investment, but the reward is a fuller, more substantive experience, not just the bitter aftertaste of too much artificial sweetener.