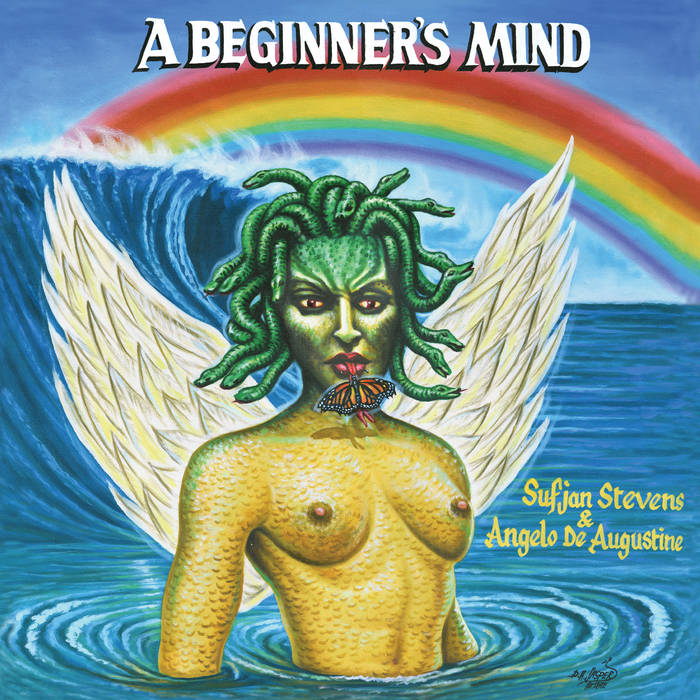 Just as Sufjan Stevens turned to video game culture to inspire the music of his triumphant 2020 release, The Ascension, often echoing the genre’s use of electronic sounds and fast beats, here in collaboration with Angelo de Augustine, they turn to a variety of movies as a jumping off point for A Beginner’s Mind. But often it’s a pretty big jump, given that the album’s title is a reference to the Buddhist concept of a young, enthusiastic pupil who knows so little that they’re open to just about anything. So, the connection between John Carpenter’s “The Thing,” and Stevens’ “(This Is) The Thing” feels pretty arbitrary, as the singer/songwriter used the title to explore familiar concepts from previous works: “This is the thing about people/You never really know what’s inside/Somewhere in the soul there’s a secret,” before concluding in the chorus that “My love is a witness for the loss of your innocence.” You wouldn’t be wrong to wonder if Stevens even needed to view the film to shape a lyric like that, touching on common themes or if just hearing the title was enough to send him off?

Sonically, this collaboration leans more in the folk/pop direction of Stevens’ earlier work on “Seven Swans,” and much less toward the bigger productions of The Age of Adz or The Ascension. Stevens and relative newcomer de Augustine combine their voices in often whispered, falsetto harmonies, over gentle guitar and piano with synthesizer and percussion gently added for accents. “Back To Oz,” a direct reference to the film “Back to Oz,” is a more lively pop effort, with a jazzy, somewhat psychedelic guitar solo, but it stands apart from the quieter tact on most the other thirteen tracks, where the twin vocal approach gives the impression of Simon & Garfunkel, without too much of that Paul Simon vocal bite. “Olympus” starts off dropping the name of the special-effects guru, “Harryhauson,” and echoes part of the storyline from “Clash of the Titans,” in the line about “Acrisius bronzed from the skylight,” but by the outro with it’s back to talk of “the touch of my wristband” and “our very first kiss,” playing in the psychology of Stevens’ imagination.

While “The Pillar of Souls” draws on “Hellraiser III” right down to the mention of the protagonist “J.P. Morgan,” and some consideration of the “rivals from Hell,” but while “You Give Death a Bad Name” is listed in relation of “Night of the Living Dead,” all the talk of zombies is quickly engaged as a “metaphor” about the state and fate of “America.,” alongside reflections rooted in Stevens’ spiritual interests in the meaning of the “cadaver on the cross.” Stevens’ gets right to the point of Spike Lee’s “She’s Got To Have It,” in his gentle, genuinely empathetic “It’s Your Own Body and Mind,” but the duo may take it a leap too far when they attempt to give voice to the inner longing of “Buffalo Bill” the derange serial killer of “Silence of the Lambs” in “Cimmerian Shade” when they attach a label of an antiquated psychological disorder, “Autogynephilia” to the tortured soul, a word that has caused great offense in the trans community. That word attaches unwelcome stereotypes where the chorus attempts to offer healing: “Fix it all, Jonathan Demme (the film’s director)/Beauty resides where your spirit dwells.”

As Stevens’ and de Augustine’s voices and musical preferences seem so close as to be indistinguishable, you hear the less well known singer on song’s attributed entirely to him, “Lost In the World,” “Lacrimae” and the title track, which is drawn from the surfer demigod of “Point Break,” played by Patrick Swayze, but his songs blend well within the context of the record. On the whole the album leans so consistently to generally quieter folk influenced ruminations that could use a bit more musical substance and energy to help differentiate from one track to the next. That certain sameness will appeal to some, but even after numerous listens the record’s sleepy similarities leave me wishing for a movie with some video game energy.