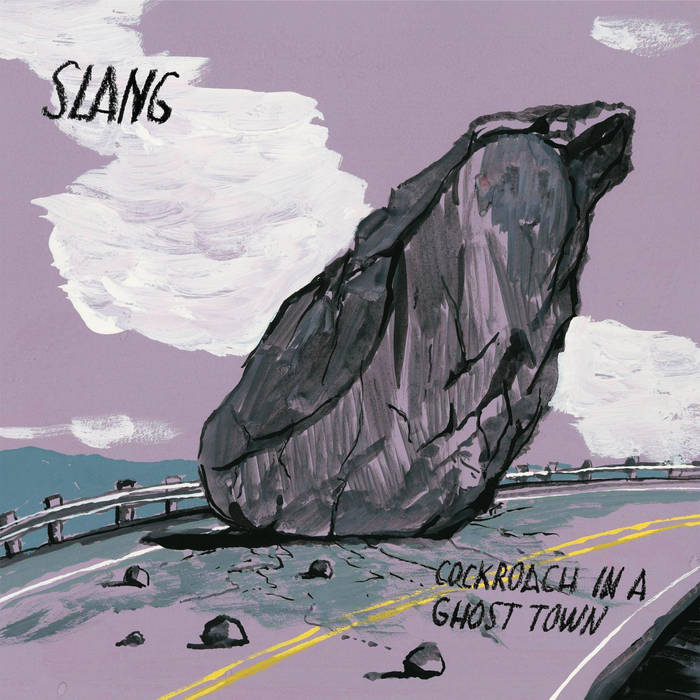 Slang started out as a side project for drummer Janet Weiss (Sleater-Kinney) and singer/guitarist Drew Grow, in Portland, Ore. over a decade ago, singing covers of the Everly Brothers and Traveling Wilburys, but Cockroach In A Ghost Town finds them joined by Anita Lee Elliot on guitar and Kathy Foster on bass for their debut album. Of course, besides her 25 years in Sleater-Kinney, she was in Quasi, and played on albums by Bright Eyes, Elliot Smith, The Shins, and Stephen Malkmus & the Jicks. Grow was the front man in Modern Kin and The Pastors’ Wives. In this setting, Grow is the lyricist and sings lead vocals, but the music is co-written by Weiss and Grow, with her voice largely heard singing harmony “aahhhs” and “oohs” with Elliot and Foster, with a brief lead vocal midway through the album’s closing track “My #1.”

The band’s music is a fun mix of classic rock’s bolder moves, built on big beats and guitars, with catchy melodies and a seemingly invincible wall of female vocal harmonies that create the foundation for Grow’s vocal. You feel the full power of the band on “In Hot Water,” with its crunchy guitars and Weiss’ punchiest drum work. The spacier “Time Bomb” has the same elements, but lots of room to hear all the disparate parts, the full airy female harmony backgrounds, up against Weiss’ solid martial drum rhythm and the distinct, bluesy guitar screams, with Grow on top singing something about a time bomb, it’s not all that clear but it works.

The album’s title track appears to be a song about the post-apocalyptic future, but Grow sings “I dream about the ending, I don’t dream about the end.” “Wrong, Wrong, Wrong” seems like it’s about a skinny dog out on its own on the “new frontier,” or the need to “get the magic back,” or “taking turns in the basement,” and wondering if “we’ll ever be warm enough.” It’s a lot to keep track of, but the fun music feels right, even though somebody’s “mucking with the sound under the counter,” in the end the track feels right, right, right. It’s good, good, good. And so is most of what Slang has done here on these 8 original tracks, and the album’s one cover, “Hit the City,” a song by the late Mark Lanegan (Screaming Trees), originally recorded with PJ Harvey. As the album suggests, this may be the end of the world, but at least the soundtrack rocks.