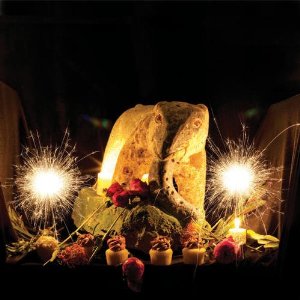 Fire Note Says: Peter Buck goes solo (with help from some friends) and branches out in new yet familiar ways.
Album Review: Peter Buck’s voice sounds like a belch being let out slowly through an old-time fire-stoker.  In spite of this I really enjoyed Peter Buck’s new solo record.  Now that I have that out of the way, let me get to the album review.  Buck is releasing his first album as a “solo artist,” although this eponymous album is certainly a group effort.  Peter Buck of course is the former guitarist for the now-disbanded R.E.M..  As a long-time fan of the group it pains me to write that the band is defunct, but if Buck continues to put out work as strong as this album, I will continue to get my (sort-of) R.E.M. fix.
That is not to say that Peter Buck fits right into the REM catalog.  There are intentional decisions to go far away from that jangle rock sound that R.E.M. popularized.  However, there are a few tracks (I’m looking at you “Some Kind of Velvet Sunday Morning”) that sound like they would fit in on Out of Time [1991].  That, and the following track, “Travel Without Arriving,” are the most R.E.M.-sounding tracks in the bunch and they sound as if Michael Stipe were being channeled.  Diverging songs include the so-weird-it’s-cool “It’s Alright,” which sounds at the end as if Peter Buck is melting down.  “It’s Alright” and many other items on the tracklist have a strong blues sound to them, which reflects Buck’s famous eclectic musical tastes.  My favorite tracks were the harder rockers “Give Me Back My Wig” and “I’m Alive” because Buck’s “unique” voice sounds like more of an instrument that adds to the grime of the music. 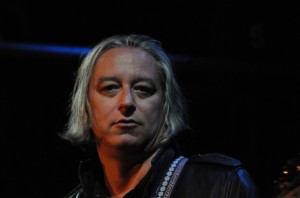 Intentional or not, Buck and friends seem to be grieving throughout the album.  A quick glance of the titles on the tracklist makes this apparent.  Now whether this is at all related to the death of R.E.M. or to Buck getting older remains to be seen.  This theme provokes a certain restlessness and energy that gives the album oomph.  In some ways Peter Buck is an homage to Buck’s early musical influences, which includes the blues, the dream pop of the 60s, and glam rock of the early 70s.  I’m happy that I could hear those influences combined with the familiarity of R.E.M.’s sound.  If Buck continues to put out music (that can admittedly be difficult to get your hands on) I will be happy to keep listening.
Key Tracks: “Some Kind of Velvet Sunday Morning,” “Give Me Back My Wig”,”“I’m Alive”
Artists With Similar Fire: R.E.M. / The Stooges / T. Rex
Peter Buck Website
-Reviewed by Matthew Heiner

The Jon Spencer Blues Explosion: Gadzooks! / Tell Me That You Love Me [7-Inch Feature]