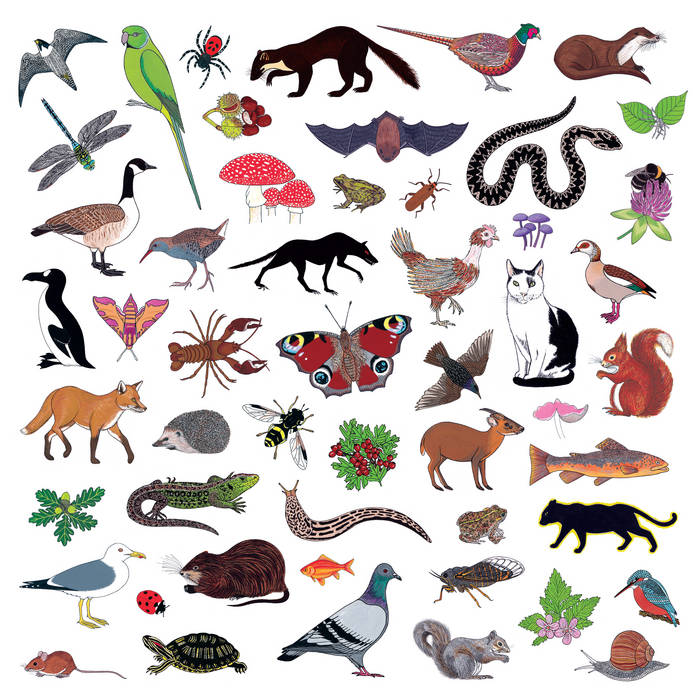 Modern Nature is at its core an exercise in folk rock meeting improvisational jazz in uncluttered rustic rural setting, brought about under the direction of singer/guitarist Jack Cooper collaborating with co-arranger Jeff Tobias, who plays bass clarinet, alto sax and adds vocals. According to Cooper, he taped this quote from Shakepeare’s “The Tempest” to the wall of his workshop as inspiration for this semi-improvisational work: “Be not afeard, the isle is full of noises.” But he could have continued the quote, which says, “Sounds, and sweet airs, that give delight, and hurt not.” Then suggesting that the sounds “hum about mine ears” as if one was dreaming, the Bard concluded the thought that “when I waked, I cried to dream again.”

As Cooper describes the recordings shared here, he imagined the core around his own guitar and voice, with Jim Wallis on drums, and John Edwards on upright bass, then invited Tobias, saxophonist Evan Parker, pianist Alexander Hawkins and violinist Alison Cotton, who he describes as “British free music luminaries,” to bring their own musical ideas and improvise freely. Cooper’s dry, straight forward guitar tones, and the often-whispered vocals set a crisp clear, often airy mood, to which the guest players interact in ways that genuinely add to proceedings, and only in a few places, most notably in “Spell” do they stretch the definition of harmony into multiple musical keys.

Given the idea of giving birth to the Island on which “The Tempest” takes place, Island of Noise may have its beginnings in Cooper’s songwriting, the additional players suggest it’s going to appeal more to jazz and new music’s listeners. “Dunes” and “Bluster” function best along the indie folk with horn augmentation route, where “Performance” has the album’s most percussive feel with a cool groovy bassline, and “Brigade” is Cooper’s most focused guitar line, and it features some smoking sax soloing from Parker. “Masque” has a brooding, bluesy, mystical feel, but then it too has enough dissonance to test the patience of some. While instrumentals like “Tempest” and “Symmetry” set a fine stage, they lack a sense of clear direction and more or less float in space with a variety of engaging sounds but no real movement. “Build” closes out the album, where Cooper gets closest to an indie/soft alternative single, with subtle horns support.

The original packaging was a box set that included a second more improvisational album titled “Island of Silence,” plus a booklet with original artworks and contributions from artists, scientists and a wide variety to English creatives. But only a thousand copies were released, and are currently sold out. Still, this sophomore album is currently available, a sign of Cooper & Co.’s expansive musical vision. “The Tempest” has inspired artists for centuries, everyone from Bob Dylan, who did an album by that name, to drip painter Jackson Pollock for “Full Fathom Five.” Much of what Cooper and his collaborators have created here does “hum about mine ears,” producing “sounds, and sweet airs, that delight,” and even when it gets noisiest, it still does “not hurt” all that much.