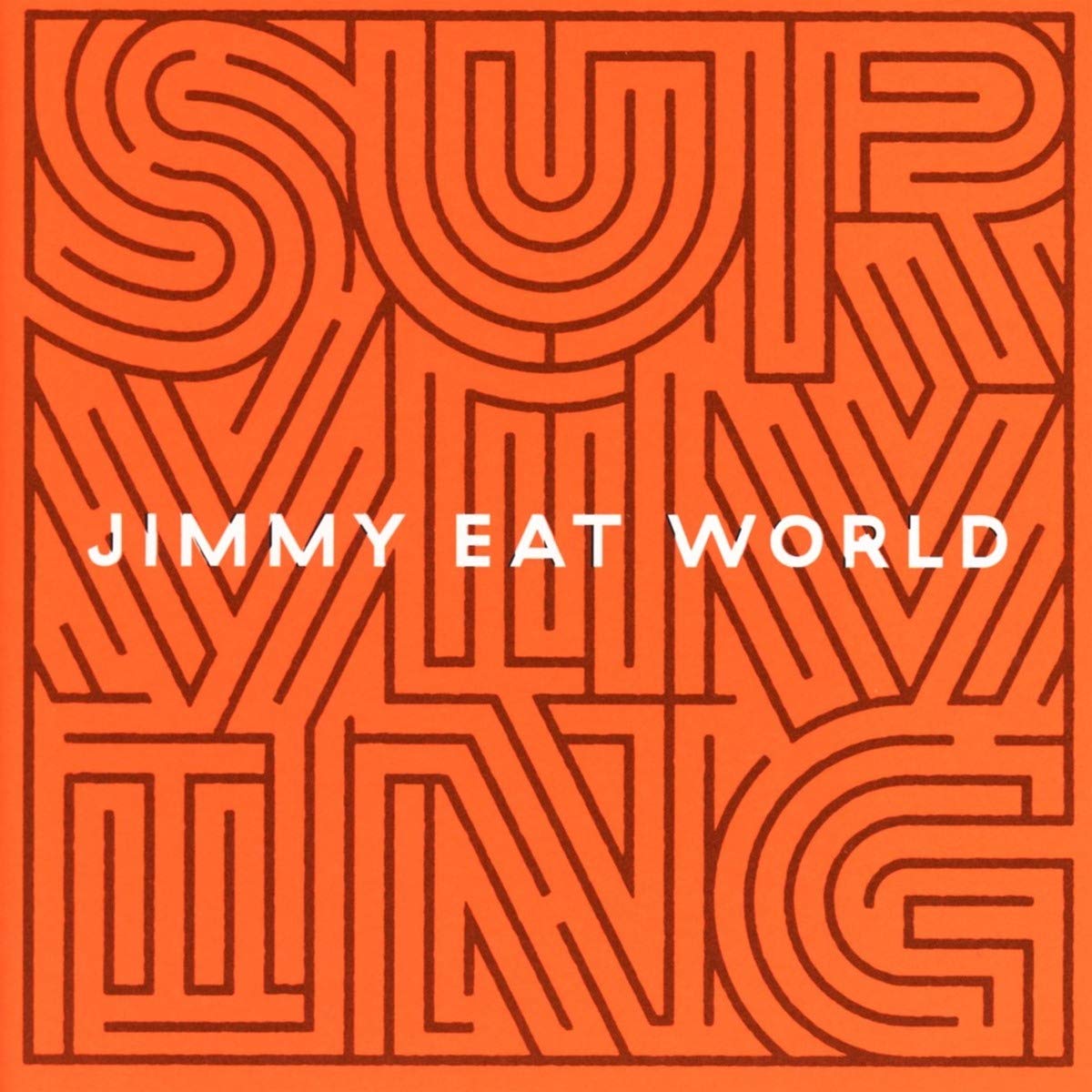 Fire Note Says: Jimmy Eat World deliver another solid collection of smart rock driven by pop hooks, their 10th studio album.
Album Review: Arizona band Jimmy Eat World struck lightning in 2001 with the piece of guitar-driven pop/rock brilliance that was “The Middle.” The song had such a broad cultural impact that in 2016, when Apple Music created an ad that had Taylor Swift lip synching and dancing to the song, “The Middle” reappeared on the iTunes Top Songs Chart 15 years after its release, while Spotify reported a 325% increase in interest. So, what does a hard rocking band working band do after a breakthrough hit of that magnitude? Well, some bands implode over the tension in their attempt to make lightning strike twice, but Jimmy Eat World has just kept at it, making solid albums chock full of more pop/rock and then gone on tour to support them.
Surviving, the tenth album from Jimmy Eat World, which has had the same line-up for the last 9 of those recordings, kicks off with two serious rockers; the title track and “Criminal Energy,” both fueled by big crunchy guitar chords you might associate with bands like Bush, and solid melodic vocals and meaty solos from Jim Adkins, and on the latter some double leads that pair Adkins guitar with that of Tom Linton. Mid-record, with get the album’s first single, “All The Way (Stay),” another big guitar rocker with a similar energy as Thin Lizzy’s “Boys Are Back In Town,” which features former background singer Rachel Haden on then a smokin’ sax solo on the back half. The second single is a re-recording of “Love Never,” which appeared last year as a vinyl only single, again a heavy, guitar driven rocker.
Clearly, Adkins & Co. have a natural way with a pop/rock hook. In “One Mil,” they mix an acoustic verse with a big rockin’ chorus, while on “Diamond” and again on the set-closer “Congratulations,” they rely again on those big solid guitar chops that never seem to fail, with a fun, bold rocking jam to close out the album tacked on at the end. In the moodier pop/rock of “555,” Adkins suggests just how you might go about “surviving” given the daily challenges to our sanity. Along with “doing the things I’ve been told, everyday,” but concludes in the final bars of the song, “I keep my focus on the simple things/try to find some peace along the way.”
So does Jimmy Eat World seek to survive, here 10 albums into a storied career, with a huge hit and lots of solid work already under their belt? Well, they keep doing what they’ve always done, writing smart rockers with a fun pop song sensibility and playing them with enough energy and passion to keep fans coming back. And here again, on Surviving it continues to work.
Key Tracks: “All The Way (Stay)” / “Love Never” / “Surviving”
Artists With Similar Fire: Bush / Weezer / Fall Out Boy
Jimmy Eat World Website
Jimmy Eat World Facebook
RCA Records
– Reviewed by Brian Q. Newcomb