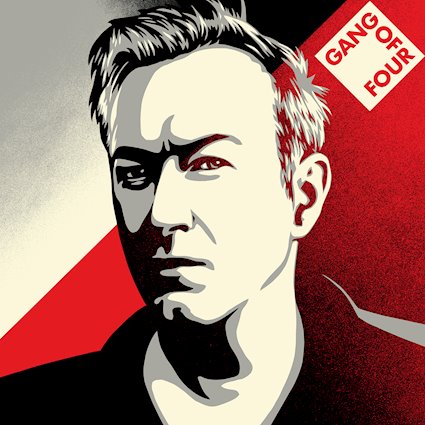 After the death of long-time Gang of Four leader and lead guitarist, Andy Gill, in February, the band released the posthumous EP This Heaven Gives Me Migraine. It included a few spoken words from Gibb, a new track that had been slated for their follow up to last year’s full-length Happy Now, another version of “Toreador,” and a remake of “Natural’s Not In It” from the band’s 1979 debut, Entertainment. This second tribute EP, Anti Hero, complete with a portrait of Gill on the cover by artist Shepard Fairey who famously created the Obama “Hope” portrait that accompanies the 2008 Presidential campaign, arrives to further celebrate Gibb’s memory, with an expectation that the two EP’s will comprise two sides of a vinyl release come the fall.

In the brief death announcement on the front page of band’s website, the band celebrates that Gill’s “final tour in November was the only way was ever really going to bow out; with a Stratocaster around his neck, screaming with feedback and deafening the front row.” An obit in the “Indpendent” described Gill accurately as “One of the most influential musicians of the post-punk era, leading his band The Gang of Four to huge acclaim with his intense, angular, staccato guitar work that blend rock with funk.”

This brief 4-song EP can’t capture the band’s full impact, the way the 20 track “best of” album, “A Brief History of the Twentieth Century” did for the band’s early years in 1990, but it can point in the direction of what made them great. The disc opens with a final hint that Gill still had good work in him, another song aimed for their next album, “Forever Starts Now,” a crunchy rocker with a bold funky bass line, and Gill’s angular guitar work. “Day Turns to Night” was written by Go4’s current vocalist John Sterry to say thanks to Gill for having “brought me along for the ride,” admitting that “you taught me how to do it right.” The song has a synth rock hook that has a Depeche Mode feel, but it works.

The two remaining tracks focus on Gill’s big guitar sound, a punchier mix of “Change the Locks” from last year’s Happy Now, and “Glass,” is a catchy stomp rocker from the Gang of Four’s earliest days. Together the four tracks are a fun, enjoyable to honor the memory of an artist’s who’s music came to mean so much to many of us, while influencing a wide swath of second generation bands from Red Hot Chili Peppers (Gill produced their debut) and Nirvana to Franz Ferdinand and Protomartyr.