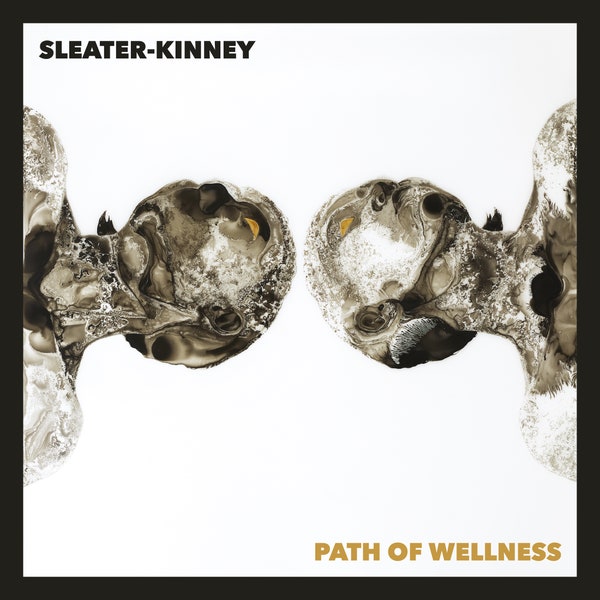 On the tenth album from Portland, Oregon’s Sleater-Kinney, the duo of Corin Tucker and Carrie Brownstein sound like the veteran musicians that they are working hard to both re-connect to the band’s nearly 30-year legacy, while continuing to evolve as they see fit. The tension is likely rooted to fan reaction to their 2019 release’s more polished production by St. Vincent, and the fact that long-time drummer Janet Weiss announced her departure when that album, The Center Won’t Hold was released. Self-producing for the first time, Brownstein and Tucker get back to basics, their two guitars, two voices, the support of a variety of Portland indie-rock players, and whatever groove strikes them as timely and relevant. They’re not trying to recreate the past as they are digging deep into their repertoire of classic rock tones to create indie pop/punk anthems to meet this specific moment.

Written and recorded as we were coming to terms with the pandemic, it’s no surprise that they are eager to sing about The Path of Wellness, the opening track which opens with a funky stutter beat as Tucker admits “You could never love me enough,” acknowledging a level of “human frailty” that gets lost in a spinning vortex of guitars that are anything but frail. In that spirit, “Worry With You,” captures the giddy desire to reconnect that most of us were feeling as vaccines were coming available, where we wanted to be safe, but some were thinking “If I’m going to mess up, I’m going to mess up with you.” It may sound a tad corny in retrospect, but we were feeling it. In that regard, Sleater-Kinney realize how easily one’s “Method” can be misunderstood, where they are “singing a song about love/and it’s coming out like hate.”

All three of these tracks echo Brownstein and Tucker’s quirky way with a song’s structure, while “High In the Grass,” “Favorite Neighbor,” and “Tomorrow’s Grave” rock a bit harder, more directly. “Shadow Town,” a rocking ballad, looks at the tensions that washed over their hometown of Portland during the Black Lives Matter protests led to clashes with Federal law enforcement, “Broken dreams they shout/Voices raised as our city breaks our heart.” While less inclined toward ironic, dark humor in their lyrics, they can still take the wind out of a guy who likes his “Complex Female Characters” to “take it easy on me.” And if the set closing “Bring Mercy” feels more like pleasant platitudes and positivity in a kinder, gentler pop song shape, there are ominous clouds and dark divisions in our communities over issues from politics and medical policy, they’re not wrong that we’ve “got nothing without hope.” Still, I can’t be the only Sleater-Kinney fan that was hoping for something more substantive and poignant.

Both of the principles here have creative lives apart from their band. During a break in the band, Brownstein teamed up with Fred Armisen to create to satirical comedy TV series “Portlandia,” where they earned both Emmy and Peabody Awards, and she’s appeared on “SNL,” “Curb Your Enthusiasm,” and elsewhere. Tucker has recorded two albums and toured with Peter Buck and Scott McCaughey in the band Filthy Friends. So, the fact that they’ve knuckled down and delivered this solid next step for Sleater-Kinney coming right out of the pandemic, taking control of the production tools for the first time, suggests they have more they want to say, more to play, more records to make. If anyone feels the duo have lost a little of their comedic charm, the 30-minute video they’ve put together to promote, The Path of Wellness, available on their website, is a total hoot, including numerous guests, and several performance videos supported by their new backup touring band – guitarist Fabi Reyna, bassist Bill Athens, Galen Clark on keyboards, and drummer Vincent Lirocchi. As they’re hitting the road with Wilco in August, they’ve produced another record that fuels the anticipation for grander and greater things to come.

Key Tracks: “Worry With You” / “High In The Grass” / “Complex Female Characters”