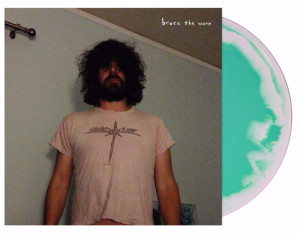 Lou Barlow (Sebadoh, Dinosaur Jr., Folk Implosion) will release his first solo album in six years on Joyful Noise Recordings. Like other JNR releases there are several cool vinyl variants to choose from.
Brace The Wave is now available for pre-order with a VIP Exclusive vinyl edition, limited to just 500 hand-numbered copies on marbled pink & seafoam vinyl. 100 random copies of this variant will include an original Polaroid “selfie” by Lou Barlow. Nice!
The record will also be available on a solid seafoam green variant, CD and Cassette which is limited to 200 copies in blue. You can pick up a copy HERE.