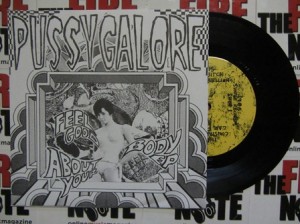 Record Store Day is coming up next weekend which reminded me of this Pussy Galore 7” that was part of the RSD release line up last year. For those of you who don’t know – Pussy Galore was a garage rock band that formed in Washington, D.C. in 1985 and was fronted by Jon Spencer. The Feel Good About Your Body 7” EP was initially released back in late 1985 and was the first taste for many of the in your face duel male/female style of Pussy Galore. It was the first music the band ever recorded and only practiced twice before the session.
With songs like “Die Bitch” and “Constant Pain” Pussy Galore came out of the gate with a ferocious attack that borrows some from The Cramps and The Stooges while setting their own bar of lo-fi fuzziness. You can also hear how this 4 song EP 7-inch set the stage for their full length Right Now! which released in 1987.
The jacket here is the original classic paper-style cover and artwork. This release was limited to 1500 copies on a standard black wax and is still widely available for a normal price at the usual 2nd hand markets.
-Feature by Christopher Anthony